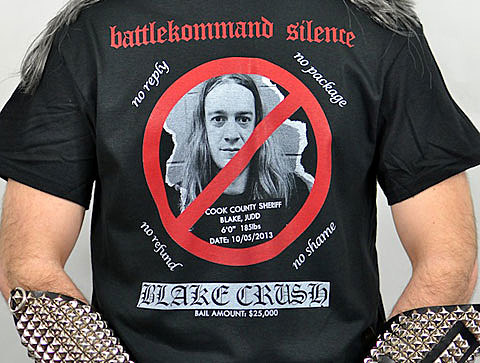 Despite being notorious for stealing and screwing people over (and even going to jail for it), people continue to work with Nachtmystium's Blake Judd (also of Twilight, Krieg, and Hate Meditation). Last week Century Media released an unfortunate, but noble statement saying they will send records to anyone who got scammed by Blake's recent, fake, direct pre-order for the new Nachtmystium record ("the last album NACHTMYSTIUM has with Century Media Records"). Blake is known for never sending people orders, but yet he found more people to send him money. Read that statement in full below.

Now, Blake's long-time friend and bandmate Neill Jameson (Krieg, Twilight) has also had enough and wants the world to know his full story. It's a long, sad tale of being screwed over by a heroin addict again and again and again and again. It paints Blake as an even bigger liar and scumbag than the public knew. The whole thing is at Noisey. Here's an excerpt:

"I decided to do the third Twilight record [with Blake] simply because of the other musicians in the band. By this point, I was fed up with the Blake-circus-shitshow but went ahead anyway. The night before I was to fly out to record Blake called me in tears. He told me that the money that was sent to cover my expenses and my cut of the publishing advance (totaling around $1500) was gone. He told me that his wife had left him (no shit, Helen Keller saw that coming) after they got into a fight; He threw her and she broke her leg in several places. When he took her to the hospital they would only accept cash because they didn't have insurance. He fucking sobbed and said everyone in Chicago wanted to kill him and he couldn't leave his house and he hoped I didn't hate him. What the fuck was I supposed to do? I already had paid for the flight and was in the hole from the "tour" a few weeks before."

Twilight is/was a supergroup that featured Blake and Neill along with Thurston Moore, Aaron Turner, Jef Whitehead (Leviathan), Stavros Giannopoulos (The Atlas Moth), and more. No wonder Thurston said black metal is "music made by pussies of the lowest order".

Century Media Records understands that many people have not received their copies of 'The World We Left Behind' even though they pre-ordered the album directly from front-man, Blake Judd. We know that this is not only frustrating but also a let down to the fans of the band. So, we'd like to help out in this situation and deliver the fans their pre-ordered copies on the format that they ordered.

Please e-mail us at: nachtmystiumorders@centurymedia.com with proof of your order and we will get you your copy of the album on the format(s) that you ordered them on. We just ask that this e-mail address be used for issues with 'The World We Left Behind' band direct pre-order issues only. Blake will not be reading any of the e-mails and we will not be forwarding any e-mails about other items that Blake sold through his personal pages or the NACHTMYSTIUM Facebook page.

'The World We Left Behind' also marks the last album NACHTMYSTIUM has with Century Media Records. We wish Blake Judd the best of luck with all future endeavors, both musically and personally.