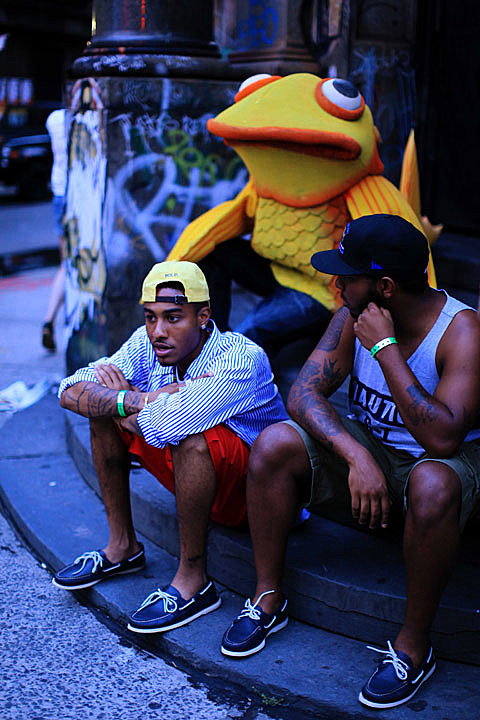 Alternative hip hop duo The Cool Kids (aka Chuck Inglish and Mikey Rocks) released their first official full length album When Fish Ride Bicycles yesterday (7/12) on Mountain Dew's Green Label Sound. The majority of the album was produced in-house by Cool Kids member Chuck Inglish, and also features some production by The Neptunes and Travis Barker. Guest spots include Bun B, Ghostface Killah, Mayer Hawthorne, Pharrell, and a few others. The album is streaming at AOL and is available for download exclusively on iTunes. BBGun directed the video for the album's lead track "Bundle Up." Check that out below, along with the making-of video, and grab the track at Green Label Sound. Also check out the Mayer Hawthorne-featured "Swimsuits." below.

Green Label Sound hosted a listening party for the album in NYC on July 7 at Sweet and Vicious. The giant fish man (pictured above) made multiple appearances at the party, as did album guests Asher Roth, Maxine Ashley, and Tennille.

The Cool Kids will tour in support of the album this summer. The tour includes a stop at Lollapalooza and a NYC show on August 10 at Brooklyn Bowl. TIckets go on sale Thursday (7/14) at noon.

The Cool Kids "Bundle Up" - Extended Version from GreenLabelSound on Vimeo.