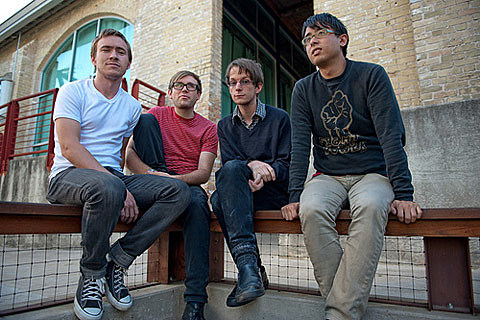 Melbourne, Australia's chamber pop-y Crayon Fields are coming back to America for a tour that will hit NYC during the CMJ Music Marathon. While more CMJ shows will surely be announced, Crayon Fields are at least playing the Chapter Music/Underwater Peoples showcase at Glasslands on October 21 with Air Waves, Andrew Cedermark, La Big Vic, Fabulous Diamonds and Guy Blackman.

Crayon Fields have a new downloadable EP, Make Peace with Love, to coincide with the tour featuring a new song, a live version of "Graceless," a great remix of "All the Pleasures of the World" and a cover of Roxette's "It Must be Love." You can get it for the price of your email address via their Bandcamp page.

If you haven't heard last year's wonderful All the Pleasures of the World, one of my favorites of 2009, you should really rectify that. It's modern baroque pop, full of swoony strings, breathy vocals and memorable melodies. You can download the title track at the top of this post. They were terrific when I saw them at Bruar Falls back in March. Definitely try and catch them if you can.

All 2010 North American Crayon Fields dates, plus some videos, are after the jump...

The Crayon Fields - Voice of Paradise