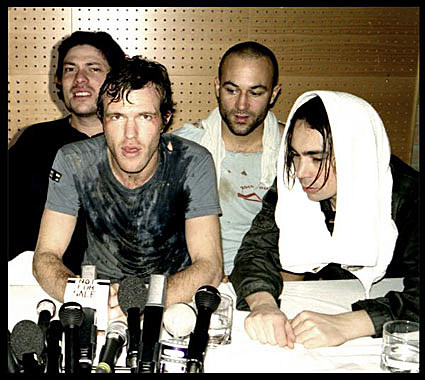 Just a couple considerations for what I'm sure is an already busy weekend.

Touring here for what I'm pretty sure is the first time are London five-piece The Crimea, who are really easy to write about, even without actually listening to their music, because there's lots of interesting factoids. John Peel loved them, and their 2002 independent single "Lottery Winners on Acid" got them signed to Warner Brothers who put out their 2005 debut Tragedy Rocks. A re-release of "Lottery Winners" scraped the UK Singles Charts and then they were then unceremoniously dropped by WB soon after. Pressing on, they released their second album, Secrets of the Witching Hour, forfree via their website last year (before Radiohead did it, mind you) and put out 16 remixes of the single "Loop a Loop" via 16 blogs (including Music Like Dirt and Nothing But Greenlights). Oh, and singer Davy Macmanus is brother of superstar BBC1 DJ Annie Mac.

While it might not scale the heights of Tragedy Rocks, Secrets of the Witching Hour is as good album, full of anthemic (but not too anthemic) songs, punctuated by the McManus' world-weary lyrics and vocals. Songs like "Loop a Loop" don't sound like much at first but then you sort of catch yourself digging it halfway through. A lot of their songs catch you off guard like that. Will they be any good live? Find out Saturday (7/12) at Cake Shop or Sunday (7/13) at Union Hall. There's also a 7/14 date for "McCarren Park" but what exactly that means I'm not sure. Full tourdates below. 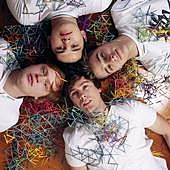 Also visiting this weekend are New Zealand's Cut Off Your Hands who just wrapped up a short West Coast tour with We Are Scientists. You might have seen last year at BV's Pianos day party that happened during CMJ. I missed it so I'm going to try extra hard to make it to one of these shows this weekend -- either tonight (7/11) at Cake Shop (where they're playing with Elephant 6 legends Elf Power) or tomorrow (7/12) at Market Hotel. Weird venues for a band whose records are as polished as COYH's recent singles. I mean that in a good way, their music is as sparkling as it is frantic and catchy. The band's debut album, You & I, is in the can and should be out this fall sometime. I can only assume we'll get a preview this weekend.

Sissy Wish, who played to almost no one on Sunday (last night of a three day weekend is a tough gig!), are getting another shot at Union Hall tonight (July 11), opening for Mia Riddle and Great Lakes as part of the venue's 2nd Anniversary celebration. Despite the lack of audience on Sunday they were a lot of fun. They're on at 8:30.

Speaking of Union Hall, I just want to plug Saturday's Wye Oak show again which I wrote about earlier in the week. Their album, If Children, is one of my favorites of the year so far and I heard they blew everyone away the last time they were at Union Hall. Really looking forward to this one.

And if you're not completely worn out from a full weekend of free shows you should definitely drag yourself over to Music Hall of Williamsburg for the Breeders Pool Party afterparty to see Mobius Band and Amazing Baby, the latter of whom I plugged in my first column. I've seen them twice now and think they've really got something. It's big, it's psychedelic, they write good songs and can really play their instruments. Despite the MGMT connections (and subsequent comparisons), Amazing Baby don't sound anything like them and are doing their own thing. There were tour dates with MGMT in August, but those have now fallen by the wayside so the band can hunker down and write some more songs. So this may be the last time to catch them for a while. Plus, it's free!

Lots of free shows this weekend, as you all probably know. It's especially good if you've recently said to yourself while perusing music blogs, "Who the hell are these bands?" Well pretty much all those bands are playing for free this weekend, whether it's No Age, Telepathe and Abe Vigoda today at the Seaport Music Festival; the massive, hard-to-pass up (not free, but only $10) show at The Yard tomorrow with Ponytail, Chairlift, Vivian Girls, etc, etc etc; or Sunday's Breeders/ Matt & Kim / The Whip extravaganza at McCarren Pool.

Cut Off Your Hands