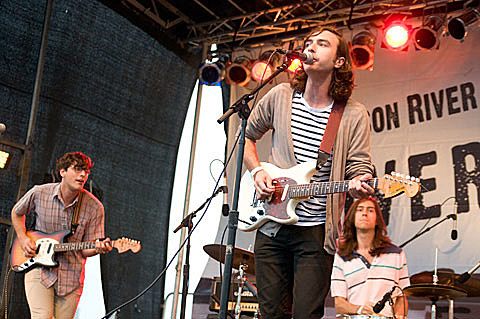 As we've mentioned, R. Stevie Moore is hosting and performing at this year's Culture Shock at SUNY Purchase. The full lineup for the festival has been announced and is being headlined on Friday (4/15) by Cam'ron and on Saturday (4/16) by The Feelies. Other performers include A Place To Bury Strangers, Twin Sister, Beach Fossils, Screaming Females, Real Estate, Woods, Talk Normal, O'Death, Bomb the Music Industry! (performing Weezer's Blue Album), and others. The event isn't technically open to non-students. The full lineup is below.

Culture Shock is one of the few shows The Feelies are playing in support of their new album Here Before which drops April 12 via Bar/None. They also play The Bell House on May 13. Tickets are still on sale. Download the track "Should Be Gone" off the new album above.

Real Estate also has four other shows in the area coming up including April 23 at Colgate University, May 20 at The Bell House with Julian Lynch, Big Troubles and Family Portrait, May 21 at Maxwell's with Big Troubles, and they will appear at B.O.M.B. Fest at Western Connecticut State University on May 28.

Full CS lineup and a video below...