photo: The Darkness at Stubb's in 2012 (more by Tim Griffin) 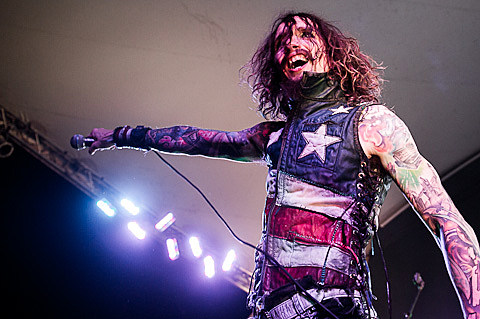 Over-the-top English rockers The Darkness just announced their return to the States on a tour this spring in support of 2015's The Last of Our Kind. Says frontman Justin Hawkins:

America - we give you the BACK TO THE USSA tour 2016, visiting as many glorious US rock citadels as possible before we return to our secret mountain-top castle to begin creating the next astonishing Darkness record.

The Darkness consists of my brother Dan, Frankie Poullain, Rufus Taylor and I. This is golden-era The Darkness. If music and good times are in your soul, come see us perform live. If you aren't overly bothered about music and/or good times, jog on - there is nothing for you here.

A Darkness show is a place where believers come together, where fluids are shared, and dreams are built. But most importantly, rock and roll is crowned king EVERY NIGHT!