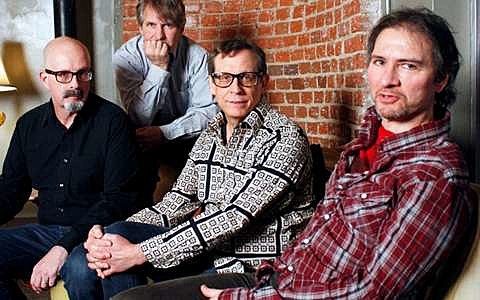 A number of your contemporaries, most notably, R.E.M., have been calling it quits. What made you guys want to do the opposite?

Chris Stamey: Peter and I were talking about making another record together back in 2005, but the songs we played for each other sounded more like dB's songs. We got together with Gene and Will at Water Music Recorders in Hoboken, one of our old haunts, and enjoyed the sounds we got on songs such as "Send Me Something Real," "World To Cry" and "That Time Is Gone." I think we would have stayed on that path at that time except for Katrina, who walked through Peter's life and left rubble.

Peter Holsapple: Chris is right. The more we played the songs we planned to do a duo, the more it sounded like it should be a group effort. I think we were also aware of our age. We thought, "We're all in our early-to-mid-50s now. Our time to make a record together isn't limitless. This is the time." [17 Dots]

The dB's just released Falling Off the Sky, first new album in 30 years to feature the original line-up, crucially Chris Stamey who wrote and sang on many of the songs on the band's first two albums. While not as nervvy as 1981's Stands for deciBels and or 1982's Repercussion, neither Stamey or Peter Hosapple have lost their melodic touch and their some really nice songs on the new album which was produced by Mitch Easter and Scott Litt who between them produced every R.E.M. record you ever really cared about. You can stream Falling Off the Sky at the bottom of this post, as well as the dB's essential first two albums.

As previously mentioned, The dB's play Le Poisson Rouge on Friday (6/15) and tickets are still available. The band have a few other shows lined up this summer and those dates are below.