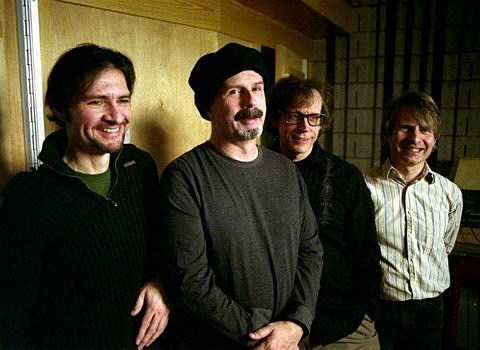 The dB's will release Falling Off the Sky, their first new album in 25 years, on June 12. It's the first in 30 years featuring the band's original line-up, including Chris Stamey who left the group after 1982's Repercussion. The album was produced by the band with help from North Carolina cohorts Mitch Easter (who was an auxiliary member of the band at SXSW this year) and Scott Litt. You can stream two songs from the album at the bottom of this post. You can stream the dB's four '80s-era albums at Spotify (Stands for deciBels and Repercussion are powerpop classics).

You can see The dB's play this Sunday afternoon (5/6, 4:45PM), headlining the annual Hoboken Arts & Music Festival. The fest is free, and happens on Washington St. between Observer Highway to 7th St. and also features Freedy Johnston, The Front Bottoms and more..

The dB's will also be playing a record release show at Le Poisson Rouge on Friday, June 15 and tickets go on sale today at noon. The band have a few more shows scattered throughout the summer and all dB's dates are below...