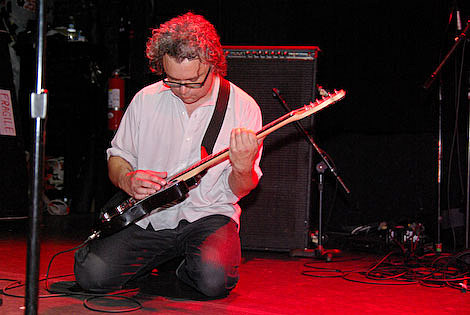 When Michael Morley isn't making music with his long-running New Zealand-based noise rock trio The Dead C, he's making just as noisy (or noisier) stuff with his solo project, Gate. Gate's latest, Moths, came out earlier this year as the followup to 2012's Damned Revolutions. You can stream the droning "Turned and Glowing Inwardly" from the latter, below.

Gate just finished touring with Godspeed You! Black Emperor (who had some words to say about their Polaris Prize win), and now he will be "perform[ing] solo for no particular reason in shows announced across the land this September." One of those shows is in NYC TONIGHT (9/26) at Union Pool, where he'll be joined by other experimental side endeavors, including Tom Carter (of Charlambides) and the duo of Samara Lubelski (Jackie-O Motherfucker, Chelsea Light Moving) and Marcia Bassett (Double Leopards). Tickets for tonight's show are still available.

Meanwhile, The Dead C also just released their own new album, Armed Courage, earlier this month (9/3) via Ba Da Bing. It's a two track album (one called "Armed," one called "Courage") and the second track can be streamed below.