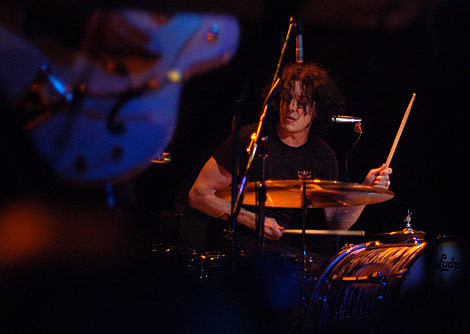 For a new band, with almost no released music, The Dead Weather sure did get big quick! That was an attempt at sarcasm, because really it's no surprise that Jack White's new band would choose Terminal 5 (on July 16th) as the location of their 2nd NYC show. Their first was at Bowery Ballroom.

The Dead Weather will be touring this summer with multiple dates in some cities, and just one show in NYC (for now?). Tickets for most of the shows go on presale on Wednesday. The NYC show goes on sale at Ticketmaster on Friday at noon ($30).

"The band's debut album Horehound, the first record to be recorded and released via Jack White's new Third Man studios and record label in Nashville, TN, will be made available through Third Man/Warner Bros Records on July 14th 2009. To date, The Dead Weather have released two tracks via iTunes and on limited edition 7" vinyl: "Hang You From The Heavens" and "Are Friends Electric?""

All DW dates below...