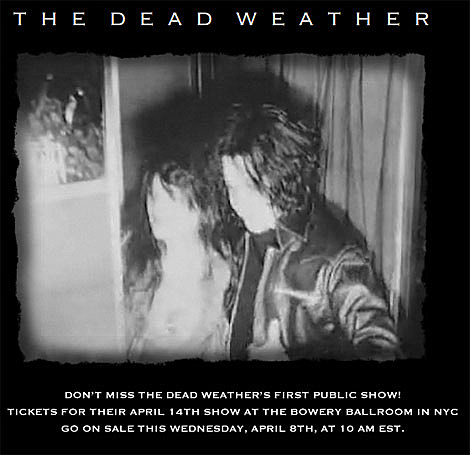 The Dead Weather are Dean Fertita (Queens Of The Stone Age), Jack Lawrence (The Greenhornes/The Raconteurs), Alison Mosshart (The Kills) and Jack White (The White Stripes/The Raconteurs). Jack White produced Horehound, which was recorded at his Third Man Studios in Nashville earlier this year and is slated for a late June release. The album will be the first full-length release on White's own Third Man Records, which includes a fully operational HQ in Nashville that houses a vinyl record store, photo studio, dark room and performance stage.

The band has released two songs exclusively on iTunes and on limited edition 7" inch vinyl, "Hang You From The Heavens" and "Are Friends Electric?".

Tickets for their April 14th show at the Bowery Ballroom in NYC go on sale this Wednesday April 8th, at 10 am EST."