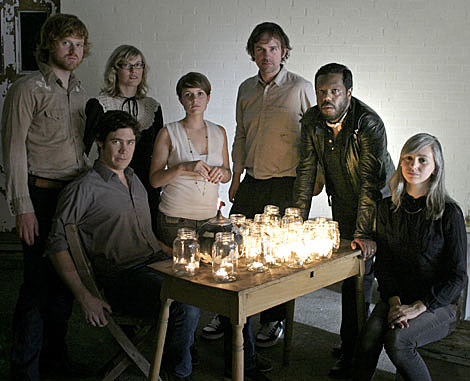 The Dears' tour bus was stolen Wednesday night in Montreal as the band was home packing for their six-week North American tour. The coach was taken from the parking lot of the Comfort Inn at 700 Blvd. in St. Jean, Pointe-Claire while the driver was asleep in the hotel, prior to their 6 a.m. scheduled departure. Fortunately, no luggage or gear was on board at the time of the theft and the band's trailer was left behind. True to The Dears' resilient nature, the veteran band isn't letting this minor mishap slow them down and will kick off the tour tonight in Toronto. All shows are planned as scheduled.

If anybody has any information about the stolen tour bus or knows of its whereabouts please contact your local authorities. Bus model: Prevost, Series 60. Accuride Alcoa; license plate: V957YW [press release]

The Dears [whose bus was probably stolen by their publicist... just kidding!] will be playing their first NYC show since CMJ last year when this mostly-new iteration of the group were still getting their sea legs. And they were good then, but I'd have to imagine The Dears are a lot tighter now. Their most recent album, Missles, is another fine blast of epic-ness as only Murray Lightburn could give. Apparently they've written already written almost a whole new album's worth of songs since October, so hopefully they'll play a few while they're here. If you can't go tonight (5/1) at The Bell House, The Dears also play Bowery Ballroom on Monday (5/4). Eulogies and Great Northern open both shows. All dates below...