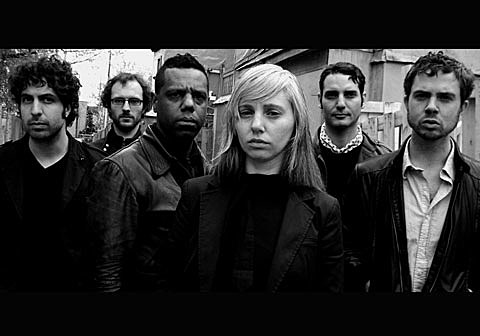 The Dears have a new album due early 2011 on Dangerbird Records, and they'll be previewing it this fall with a series of live shows. The band will play the record in-full at eight shows scheduled as multi-night stays in three cities: three in Toronto and Montreal, two in Brooklyn. Merch sales at the shows will go to two charities, Montreal City Mission and War Child.

The NYC dates, on November 3rd and 4th at Knitting Factory, go on sale Friday, July 23rd at 10am.

They have a new lineup, pictured above, with some old faces. Details on the current lineup and the tour dates are below...

Returning after a decade's absence is Roberto Arquilla, whose dextrous bass work on the debut End of a Hollywood Bedtime Story helped define the band's sound. Shirking the spotlight for the mixing desk--contributing sonic expertise to several of The Dears' records and live sound for Stars, The Stills, and more--he now returns at this crucial juncture to bring back his effortless cool.

Guitarist and keyboardist Rob Benvie's first tenure (c. 2002) was brief, but he has unofficially served as consultant and multi-instrumentalist in the years since. Alongside a lifetime of rock with beloved East Coast rockers Thrush Hermit and electro-psych experimentalists Camouflage Nights, Benvie is also a novelist, screenwriter, and purveyor of all things au contraire.

Known for both virtuosic Hendrix-isms and a restless romantic spirit, guitarist Patrick Krief has persevered through some of the band's brightest and darkest years, from No Cities Left through to Missiles. Leader of Montreal's diabolical rock ragers Black Diamond Bay and a prolific solo artist on his own, Krief returns with his own breed of genius and madness.

Post-Missiles, The Dears found themselves in need of new blood behind the drums. They immediately knew where to look: for years rumours had swirled of a hotshot trapsmaster lurking around the Niagara region. After a lengthy, year-long hunt, we introduce the mighty Jeff Luciani, who was finally tracked down and enlisted to anchor the mayhem.
Singer/composer/multi-instrumentalist Murray Lightburn has been portrayed in many lights: a tortured genius, a perfectionist, a man on a near-spiritual quest for redemption through song. There may be truth to all or none of these claims.

Natalia Yanchak is The Dears' keyboardist, vocalist, conceptualist and matriarchal referee. She brings the crucial yin to Lightburn's yang: the necessary calm during the band's fiercest storms.