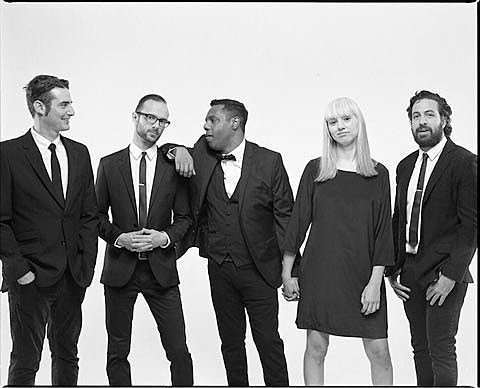 The Dears' new album Times Infinity Vol. 1 is out next week (9/25) and the Montreal band recently released a video for single "Whose Side Are You On?" Directed and animated by Sinbad Richardson, it tells the tale of a Hercules beetle looking to escape it's unfortunate urban confines. Says the director:

Murray [Lightburn] came by to sit down and talk about the video and the overall sentiment of Times Infinity. The point that mostly inspired the concept for I Used To Pray For The Heavens to Fall was when he described the feeling when Natalia and the kids leave the house and he has a deep sinking feeling of concern for them. I thought this was a dark and sweet notion of family and the story applies that notion to a young couple that are torn apart by entomology. I can't say how the Hercules beetle character came to be, it really just popped in my head once I started thinking of the story on an insect level.

Believe it or not, this is our very first 'lyric video.' We asked our pal Sinbad (Omega Dog video director) to create something special, something that would appeal to everyone, young and old. What he delivered was a 'lyric video+' that made Natalia [Yanchak - band keyboardist and Murray's wife], cry the first time she saw it.

Calling this a lyric video doesn't quite do it justice. You can check it out below. Also below is a stream of "Here's to the Death of All the Romance" (which references this song from The Dears' 2003 album No Cities Left.)

The Dears are on a Canadian tour this fall but will pop below the U.S. border to play Brooklyn's Rough Trade on October 28. Tickets for that show go on sale Friday (9/18) at noon. All dates are listed below...