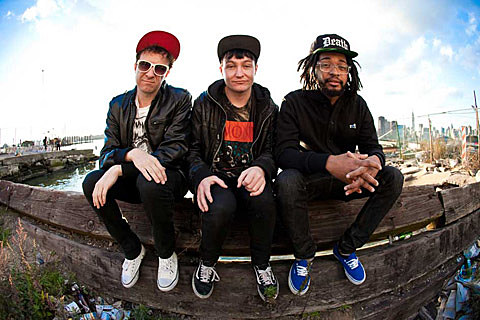 Pay attention because The Death Set (site NSFW) is going to clue you into a new norm in social interaction. Next time you see your homeboys walking down the street, make sure and give them a "Slap Slap Slap Pound Up Down Snap" to let them know what's really good. An instructional video is below, along with a video for the new song of the same name which is available for purchase now via Ninja Tune. "Slap Slap Slap Pound Up Down Snap" comes from The Death Set's forthcoming LP Michel Poiccard:

The Death Set's new album, 'Michel Poiccard', comes prefigured by tragedy. For their first record 'Worldwide', the core of the group had been the two Aussie ex-pats who moved together to Baltimore in the early noughties - Beau Velasco and Johnny Siera. Just as the pair were about to embark on writing a new album together, Velasco, who had struggled with drug addiction on and off throughout his life, died of an overdose.

The band were shattered, so much so that Johnny still finds it almost impossible to talk about. It wouldn't have been surprising if the group had decided to call it a day. Instead, Johnny Siera, with long time band members Daniel Walker and Jahphet Landis decided to make the record a celebration of Velasco's life. Relocating to Brooklyn and enlisting long time friend and Baltimore associate XXXchange (Spank Rock, Kele, The Kills) to man the desk, they created 'Michel Poiccard', an album which loses none of the charm of their previous "punk spazz" work but adds considerable depth, both in terms of the punch and bottom end that XXXchange brings to the table, and in terms of a sense of desperate loss or longing, which permeates everything on the record and reaches a considerable pinnacle on 'I Miss You Beau Velasco' and the closer 'Is It The End Again?'

So although the record comes with a heavy heart, The Death Set have vowed to honor their friend by living the everlasting creedo by Dave Chapelle: "It's a celebration, bitches!". "Michel Poiccard" hits the streets on 2/28.

Make sure and study the "Slap Slap Slap Pound Up Down Snap" video before you get out to see The Death Set with Spank Rock on March 26th at Music Hall of Williamsburg (16+ to get in). They are headlining this 600+ capacity show, so show some support and get your $10 tickets now!

Videos and all tour dates are below.

--
Introduction to the "Slap Slap Slap Pound Up Down Snap" Handshake

The Death Set - Slap Slap Slap Pound Up Down Snap