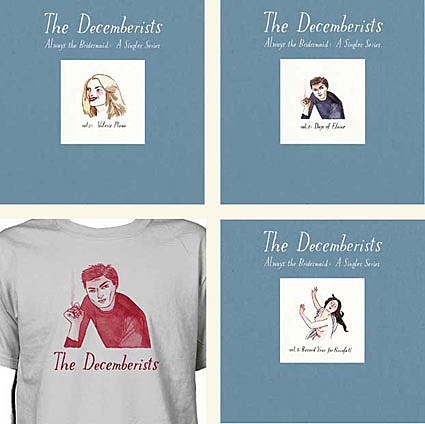 The Decemberists will release Always The Bridesmaid: A Singles Series this fall. The three volumes will be available digitally and on 12" vinyl. Volume 1, comprised of "Valerie Plame" and "O New England," will be released on October 14th. The band will give "Valerie Plame" its national television debut on "Late Night with Conan O'Brien" on November 3rd, the eve of the United States presidential election. Written from the point-of-view of one of Plame's inside contacts upon discovering her true identity, the song is an amorous tribute to the onetime CIA operative.

Volume II and Volume III of Always The Bridesmaid: A Singles Series will be released on November 4th and December 2nd respectively. The series will be available digitally at DSPs, released by Capitol Records, and on 12" vinyl via The Decemberists' own label, Y.A.B.B. Records/Jealous Butcher Records. Fans who pre-order all three singles through the band's website will receive a limited edition version on colored vinyl. The vinyl will also be available at select independent retail stores (go to http://www.thinkindie.com to find out where). In the U.K., Rough Trade will release the series digitally and on 7" vinyl.

There's a presale going on now for November tour dates that include a show at Terminal 5 in NYC AND a show at the new Wellmont Theater in Montclair. All dates and the above-mentioned singles tracklists, below...

Track listings for Always The Bridesmaid: A Singles Series: