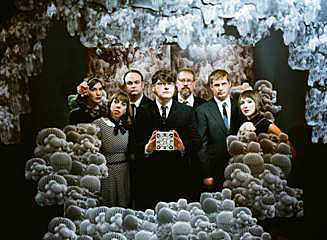 The Decemberists have announced the first leg of their Spring 2009 North American tour in support of The Hazards of Love, their ambitious new album to be released by Capitol Records on March 24th. The 16-date run will kick off May 19th at the Hollywood Palladium in Los Angeles, and include a June 10th performance at Radio City Music Hall in New York, as well as a set at the 2009 Bonnaroo Music & Arts Festival in Tennessee.

A limited number of pre-sale tickets go on sale today to the public on a first-come, first-served basis at http://www.decemberists.tickets.musictoday.com. General ticket on-sales begin on Friday, February 13th. Full venue and ticketing information is available at The Decemberists' website. More upcoming tour dates will be announced shortly.

On tour, The Decemberists will present a full performance of the album, a 17-song suite that tells the tale of a woman named Margaret who is ravaged by a shape-shifting animal; her lover, William; a forest queen; and a cold-blooded, lascivious rake. Joining the band on stage will be Lavender Diamond's Becky Stark and My Brightest Diamond's Shara Worden who deliver the lead vocals for the female characters. The band announced last week that they will give the debut live performance of The Hazards of Love when they headline NPR Music's South by Southwest showcase at Stubbs in Austin on March 18th.

30 seconds after I posted the Radio City date, the whole tour appears in my inbox. All dates below...