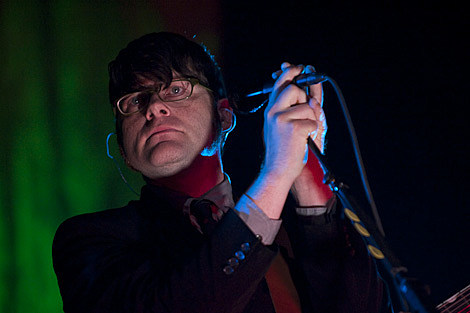 "The Decemberists have announced Fall dates for their "A Short Fazed Hovel" 2009 tour. The tour, which features a full performance of their acclaimed new album The Hazards of Love, has been earning rave reviews as it crosses the United States from coast to coast, including sold-out performances at Radio City Music Hall in New York City, the Edgefield Winery in their hometown of Portland, Oregon, and stand-out performances at major summer festivals including Sasquatch and Bonnaroo. The band will also be performing this year at the Newport Folk Festival, Lollapalooza, Austin City Limits Music Festival and Treasure Island Music Festival."

The new set of tour dates includes a September 21st show at the Wellmont Theater in Montclair, NJ with Laura Veirs. Tickets for all new dates are now on PRESALE.

On August 1st The Decemberists are playing a non-Hazards of Love-album set at the Newport Folk Festival (an alternative to All Points West). NPR Music, who also just had the band in the other day, will be live webcasting and broadcasting it.