The Decemberists at Radio City (more by Tim Griffin) 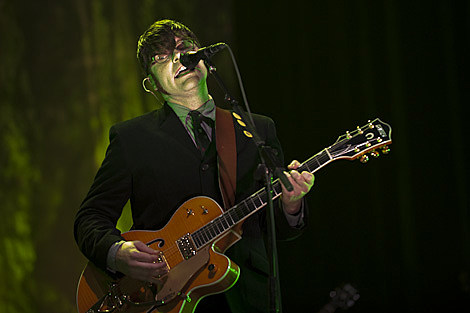 January 25th is sold out and the 26th is getting there (tickets), but The Decemberists have now added a third show at the Beacon Theater on January 24th (also with Wye Oak). Tickets go on sale Fri 12/10 at 11AM - no AMEX presale information is currently available, but the show is currently on fan pre-sale.

The tour is in celebration of the new LP The King Is Dead, available for preorder in various incarnations including a super deluxe boxset with the vinyl, CDs, a DVD on the making of the record, a book, and much more.

"The Decemberists have partnered with The Impossible Project and photographer Autumn de Wilde to create a DELUXE BOX EDITION of The King Is Dead, their forthcoming Capitol Records album which will be released on January 18, 2011. Rough Trade Records will be releasing The King Is Dead in the UK and Europe on January 17. The preorder of the set has launched today exclusively at Decemberists.com.

Each of the 2,500 limited edition box sets will be unique, with every one containing a one-of-a-kind original Polaroid photo by de Wilde. The linen-wrapped clamshell box will have a foil-stamped cover, and will also include the CD, 180-gram white vinyl with an exclusive cover design, the DVD Pendarvia (a 30-minute short film by Aaron Rose documenting the making of the album), a 72-page hardcover book featuring over 250 photos by de Wilde and illustrations by Carson Ellis, and a signed Giclée print of an exclusive illustration by Ellis. A sample of the DELUXE BOX EDITION can be viewed at Decemberists.com.

The project was made possible by Impossible, who provided de Wilde with the vintage Type 100 "peel-apart" Polaroid film necessary to capture the 2,500 individual photos that were taken during the album's recording sessions at Pendarvis Farm outside of Portland, Oregon, and in de Wilde's hometown of Los Angeles, California."

Updated dates, and some videos of the band performing new songs, below...

--
The Decemberists - "Rise to Me" Live from The King is Dead

The Decemberists - The King Is Dead (Available Everywhere January 18, 2011)

Colin Meloy, new Decemberists track: "Down by the Water"