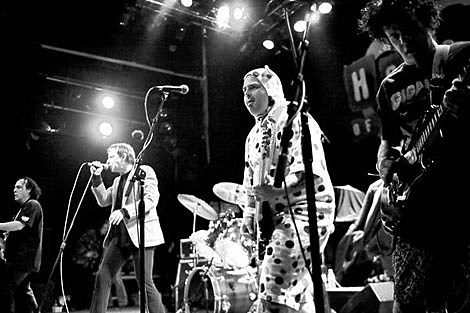 Happy Punk New Year! Punknews is reporting that The Dickies have added a New Years Eve show at Bowery Electric (the bar co-owned by Jesse Malin) followed by an already-on-sale night of raucous rampaging at Southpaw on Jan 2nd. Bowery Electric details are scare, but assuming it's true, that means that New Year's Eve offers a PAIR of 70s punk pioneers to choose from... as we know that The Damned are set to blast off at Gramercy (as well as on Dec 30th).

The Dickies' style is campy and humorous, influenced by The Ramones, for whom they sometimes opened... Many of their lyrics concern Southern California culture, rife with references and in-jokes... [and] they are also known for recording several fast-paced punk covers of classic rock songs, including the Moody Blues' "Nights in White Satin", Black Sabbath's "Paranoid", Barry McGuire's "Eve of Destruction", and the Human Beinz' "Nobody But Me".

Drug problems slowed The Dickies down considerably in the 1980s, but they have continued playing and recording sporadically to the present day. Guitarist/keyboardist/saxophonist Chuck Wagon (born Bob Davis) committed suicide after a break-up with his girlfriend in June 1981; the group has not used keyboards live since. Jonathan Melvoin, who played drums on The Dickies album Idjit Savant, died of a heroin overdose July 12 1996 in New York City, aged 34, whilst on tour playing keyboards for the Smashing Pumpkins.

The Dickies released the live album Live Destruction on Nov 4th, and have only one other date on their tour schedule... Dec 12th at The Regent in Los Angeles.