The Dicators played CBGB Friday October 13th, 2006 - the last-ever Friday night show at CBGB's, and the first of a two-night run for the reunited 70's NYC punk band. The club closes forever Sunday night October 15th with a performance by Patti Smith.

I wasn't there Friday night, but "Adam" was nice enough to leave his review in the comments. I republished it below... 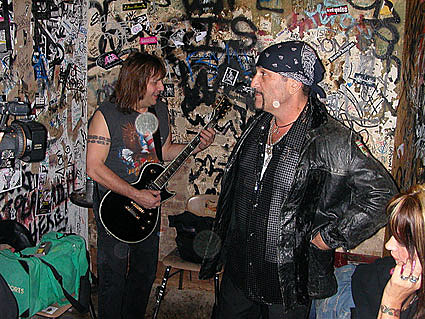 I am not a big fan of nostalgia. When I look at the closing of CBGB, I don't feel too bad for Hilly as he is easily making millions a year in selling T-shirts in the malls of America. I also don't really believe in the idea of recreating CBGB in Las Vegas although it does make some sick sense. Imagine Joey Ramone slot machines combined with the sound of punk metal. Hell, I would go check it out when I am in Vegas.

Still the place for me was not as important as lets say the Bottom Line or the Capitol Theatre. There were folks there in the 70's who went every night. I was not one of them. But I was there often enough to appreciate the scenery and the music. It was part of my youth, my rebellious youth. I was into the Ramones, Dictators and Dead Boys along with stuff like Bruce. I remember the first time I saw the Ramones at CBGB and I got it like that. I got the weirdness, and the feeling of being disaffected along with the humor. They were brilliant in their prime as were the Dead Boys who were the most underrated live band out of that scene. A friend and I discussed a show they did at Town Hall as part of a record convention and a couple of people joined us in the discussion. All agreed it was an incredible show.

So I sold my Social Distortion ticket and went on line at CBGB around 7:15. Ran into my friend Mike F. who knows everyone from the CB scene and who has millions of stories which usually ends with Stiv Bators mooning someone. I also ran into Helen Wheels' brother who was also tight with everyone and he showed me a picture of his sister in a book about Jewish Punk Rockers that was being released in a party at CB Gallery. Helen was an important part of Blue Oyster Cult (co-writing some songs with the band) as well as performing at CBGB often in the late 70's. Her brother told us so many great stories including one of Patti Smith seducing a young Jackson Browne (or it might have been the other way around) I told him he has to write a book.

By the time we got in, it was about 8:50. CBGB is really a shithole and has changed little in the last 33 years. We went right to the front of the stage and stayed there all night. The Bullys were the first band on as they are really known as the band who lost their their guitarist and leader when 9/11 happened as he was a fireman who lost his life when the buildings collapsed. But as I wrote last month when the Continental closed, they are a rarity in that they are a local band with a great singer. They performed a quick half hour set with songs about fast food and fighting which is what you would expect from a punk band.

As we were waiting for the Sic F**ks, I realized it was a reunion. Sal C who is the Dictators archivist was there, Camilia S. who I worked with for a couple of years was wearing her original Dictators jacket from the Bloodbrothers album cover, Dave Z. and Marc S. was there and they are guys who I have known for 25 years as we went to Bruce shows together. We all lied about how good we looked (actually it was not a lie as everyone is doing well) and the many nameless folks who I know from the NY concert scene. Just a major party.

The Sic F**ks (who I will refer to as SF) came on and I was speechless for a moment. Tish and Snooky were their backup singers wearing garter belts (and looking good for middle age women) along with the band wearing dresses and garters. Middle age men should not wear garter belts, but lo and behold they did. The lead singer is a paunchy short balding guy. But they kicked ass last night. Russell the lead singer was diving into the audience and doing somersaults on stage while the band was grinding with the backup singers. Damn good set. Punky with elements of funk (they also had a clarinet player).

By now, it is around 11:30 and word gets to us that there is still a line outside of CB's.

Ah, the Dictators. I have waxed powerful words and ascribed many qualities to them that folks who don't get them don't understand. Over the last 10 years, they have been my favorite band since I rediscovered them at a Tom Clark benefit at Brownies in 1997. I went to see Patti but they headlined and absolutely were stunning. I have pretty much caught every NYC area gig since.

Their last gig was at the Little Steven Garage Festival where they were the best band that day. Mike was working backstage taking photos and told me stories of people coming up to him and asking him who they were as they could not believe how good they were. They foolishly lost the momentum from the disagreement between members of the band and did not perform since as a full band. The last time they played CBGB, it was for two nights to film a DVD and the performances were disappointing and the material was not released.

CB's by now is packed as the band comes on and storms into "New York, New York" with the opening lyrics of, "Smoking Marijuana, watching Channel Five" and then goes into "The Party Starts Now". Dick Manitoba is in great voice having trimmed down a couple of pounds since the almost Dics performed at the last night at the Continental.

Tonight the band is a five piece as Scott Kempner is in from LA. He was part of the original band but left around 2002 to move to the West Coast and the band performed as a four piece with the exception of the Little Steven gig. He is playing rhythm which allows Ross The Boss, who is the best unknown guitarist in America (In Europe he is revered for his work with Man Of War) to do lead.

The band rehearsed for two nights and are better than they should have been given those circumstances. They go into Master Race Rock which is off the first album which came out in 1973 and has these lyrics:

Hippies are squares with long hair
And they don't wear no underwear
Country Rock is on the wane
I don't want music, I want pain!

Dictators can swing
Make you dance and sing
Cause an oil spill
You don't know us, but you will!

We're the members of the master race
Got no style, and we got no grace
Sleep all night, sleep all day
Nothing good on t.v. anyway

We've reached a higher spiritual plane
That is so high, I can't explain
We tell jokes to make you laugh
We play sports so we don't get fat

We can sweat and stink
We can eat and drink
Don't do what we're told
And we're scared of growing old!

Lyrics written by young guys who loved White Castle and who still eat them. Dick does an intro before "Who Will Save Rock And Roll" talking about how good things have to end. How the Fillmore is an office building and a story about how he used water from the toilet at CBGB to do heroin. Hey, if he can survive that he can survive anything.

I fall to my knees
and look to the sky
Who will save rock and roll?

Murray The K is not here today
so who will save rock and roll?

I saw The Stooges, covered with bruises
who will save rock and roll?

June 1st, 67 something died and went to heaven
I wish Sgt Pepper
never taught the band to play

The place goes goes insane as Ross goes into the riff for "Sonic Reducer". Dick looks up to the sky in memory of Stiv and the band starts to talk about the ones who are no longer with us who came out of CBGB, Joey, Johnny, Dee Dee, Johnny Thunders, Jerry Nolan. "Sonic Reducer" is ridiculous as Ross is playing lead which is incredibly fast and melodic. Keep in mind that he is two inches from my face. We are all sweating by now.

They play a couple of more songs and everyone is exhausted. It is 1:20 and I am going to the infamous bathroom which in order to get to you have to pass the cubicles that pass for dressing rooms. The band is greeting everyone and taking pictures and signing autographs.

An amazing night and for me they were the best band in the world last night. I also get to do it again tonight.