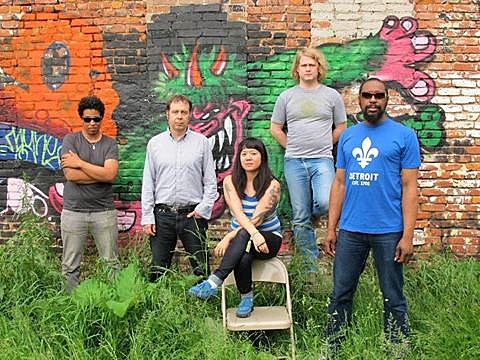 As mentioned, Detroit garage rockers The Dirtbombs are releasing their long-awaited "bubblegum" album, Ooey Gooey Chewy Ka-Blooey! next week (9/17) via In the Red. You can stream the whole thing right now over at SPIN who also talk with main Dirtbomb Mick Collins. Mick tells them a bit about each track like lead track, "Crazy for You" (streamable below):

When I was a kid in Detroit, there was a station called CKLW, which is actually across the border in Canada. They were a prime source for AM pop and quasi-bubblegum, not the sort of Saturday-morning-cartoons bubblegum this album is based on, but the stuff that would get played anyway. That song for me just sounds like a CKLW song to me. I wasn't making a conscious effort of trying to write a song like that, but as I was writing the song, it was like a CKLW moment. [Laughs.] When I was first writing it, it seemed like any other song, but right as we started laying down the tracks, I was like, "Oh, this is the single!"

The Dirtbombs haven't announced any tour plans surrounding the new album but they will be in NYC this weekend for a free block party celebrating the opening of the Shinola Flagship Tribeca store (177 Franklin @ Hudson) on Saturday (9/14). The party runs from noon - 4 PM and also features a performance by Sleepy Man Banjo Boys, plus DJ Rockaton and DJ Austin Peters spinning tunes between sets.

Flyer for the block party, plus "Crazy for You" track stream, below.