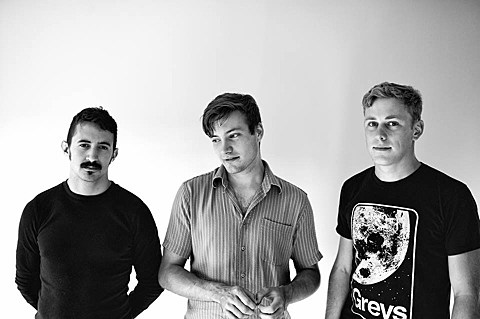 Canadian rockers The Dirty Nil already have some killer singles/EPs, and they're set to release another EP, Smite, in January. The new single from that EP is the rippin' "Nicotine," which is an under-2-minute blast of punk speed and aggression with a quick mid-section of J Mascis-worthy riffage. The song and its video premiere in this post, and we highly recommend checking it out below.

The Dirty Nil were supposed to cross the border for their first US show opening for Crystal Antlers at Glasslands tonight (10/28), but unfortunately visa issues have forced them to drop off. The show is still going on as planned though, and The Dirty Nil have been replaced by another solid Canadian punk band, PUP, in addition to Brooklyn's Vasillus. Tickets are still available.

Meanwhile, PUP just joined another Canadian punk band, Fucked Up, at a Halifax Pop Explosion show last week (10/24). After opening the show, PUP came on stage during FU's encore to back Damian Abraham during "Queen of Hearts."

Video of the Fucked Up/PUP collaboration, along with the new Dirty Nil video and the updated list of Crystal Antlers tour dates, below...