The Dismemberment Plan at Pitchfork Fest 2011 (more by Dominick Mastrangelo) 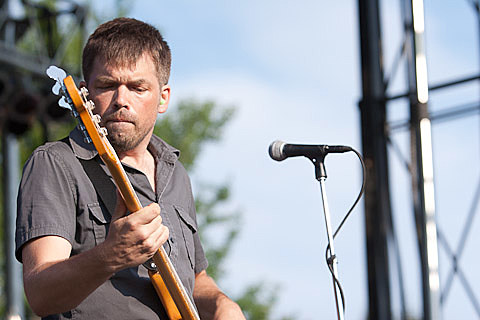 DC indie rockers The Dismemberment Plan reunited a few years back, and have been continuing to tour (they play the awesome Riot Fest Chicago this year), and now they're set to release their first album of new material since 2001's Change.

The new album is called Uncanney Valley, it was recorded by J. Robbins (of Jawbox, Government Issue, Office of Future Plans, etc) and produced by D-Plan member Jason Cadell and The Dismemberment Plan. It's due out on October 15 via Partisan. The album tracklist and a few videos of them playing the new songs live are below.

Meanwhile, Travis Morrison of D-Plan is also now fronting a new band, The Burlies, who have an upcoming NYC show happening on July 20 at Shea Stadium with Paperhaus, Arms, and Electric People.

All D-Plan tour dates are listed, along with the album tracklist and videos, below...

The Dismemberment Plan - "Daddy Was A Real Good Dancer"

The Dismemberment Plan - "Living In Song"