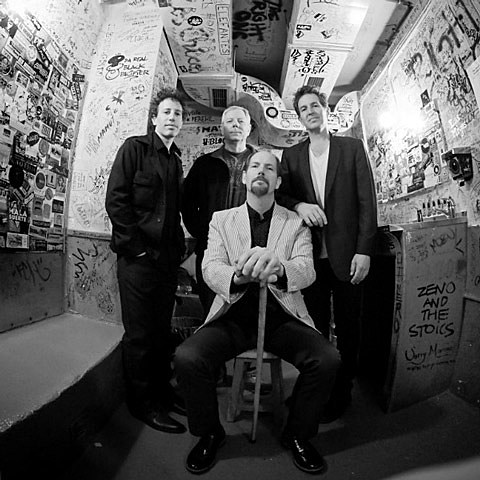 Dream Syndicate was one of the first bands from Los Angeles' psychedelic revival (misleadingly dubbed the paisley underground) to reach a national audience. While many of the movement's bands plumbed the Byrds/Buffalo Springfield or Pink Floyd archives for inspiration, Dream Syndicate's weird, obsessive lyrics, relentless noise maelstroms -- mixed with eerie/pretty otherworldly dirges and ballads -- and singer Steve Wynn's nasal rasping and ranting recalled the Velvet Underground, though (of course) they steadfastly denied that to be their intent. - [Trouser Press]

Steve Wynn just came through NYC with The Baseball Project and while that group still has a few innings on their 2014 tour, Steve's old "paisley underground" band The Dream Syndicate have been back in business as well. Wynn reformed the band in 2012 with '80s-era members Dennis Duck and Mark Walton, plus Miracle 3 guitarist Jason Victor and they've been playing sporadically ever since, including a North American run starting at next weekend's Bumbershoot festival in Seattle. The band will be playing their "first NYC show of the 21st" century at Rough Trade on November 15. (Not only that, it's their first NYC show since Reagan was President.) Tickets will be available soon via Ticketmaster.

When they reformed The Dream Syndicate were doing 1982's The Days of Wine and Roses in full and this year they've been doing the same for 1984's Medicine Show:

We have never played this album start to finish at a single show, let alone for a whole tour. But now that we've gotten a pretty good handle on playing "The Days of Wine and Roses" all the way through, this seems like a good, new challenge. We'll round out the set with songs off the other three albums as well as the odd (or not so odd) cover or two.

No official word on whether on what the Rough Trade show will consist of yet. Stay tuned.

All Dream Syndicate. Baseball Project, and Steve Wynn solo dates are listed (via Slicing Up Eyeballs), along with a streams of The Days of Wine & Roses and Medicine Show, below...