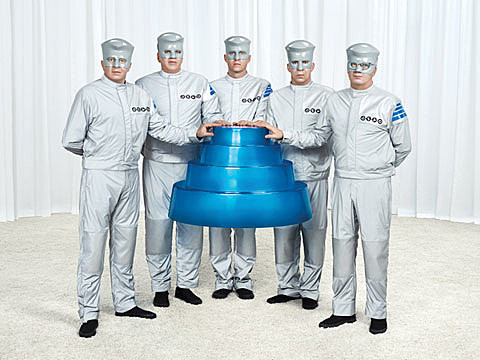 After a couple of shows in Texas, The Drums (who recently lost a member) ("we are sorry to say that Adam has left The Drums. Jonny, Jacob and Connor are devastated") will kick off their tour with Surfer Blood on September 27th in Phoenix, AZ. That's the same tour that makes its way to Webster Hall in NYC on October 20th (a show that is also part of CMJ, and which will feature an opening set by The Dewars). That tour ends two days later, October 22nd, in Philly.

Eight days after that, on mischief night, the Drums will share a bill with Devo and Neon Trees at Hammerstein Ballroom in NYC. The "second annual RXP Halloween Concert" is on sale now (for the low low price of $55-with-fees a ticket).

For Devo, it's one of just three shows they have coming up at the moment. The other two are Moogfest and Fun Fun Fun Fest.

And speaking of Surfer Blood,

"According to a Brightest Young Things interview with Surfer Blood lead singer JP Pitts, the indie rock upstarts recently signed a record deal with Warner Bros. The group plan to release an EP on current label Kanine next year before making a jump to the majors with an as-yet-unscheduled LP to be released by Warners and Kanine." [Pitchfork]

The Drums' debut, self-titled album was recently released by Downtown.