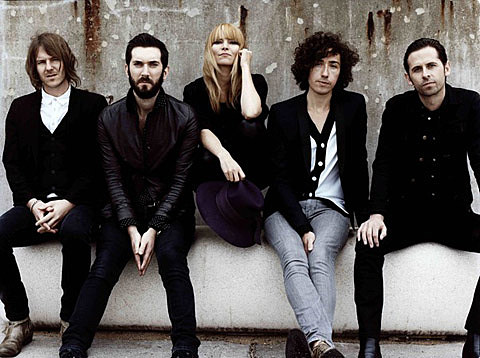 The Duke Spirit's new album, Bruiser, won't be out in the U.S. till January but NYCers have two chances to see them tomorrow (10/18) as part of the CMJ Fest: 8:30 PM at Bowery Hotel and then at 11PM at Brooklyn Bowl. Both shows are free whether you have a CMJ badge or not and RSVP details are below. The band are also playing Wednesday afternoon (10/19, 2:30PM) at the Puma Store in Union Square, which is also free.

For those who don't mind not owning a physical product, Bruiser will be out digitally on November 21. The album, which was mixed by Alan Moulder (U2, My Bloody Valentine, TPOBPAH), and is another solid collection of big riffs, anthemic choruses and the powerhouse vocals of pistol Liela Moss. To hold you over, at the top of this post there's a live MP3 of new single "Don't Wait" recorded for Later With Jules Holland. Additionally, The Duke Spirit are also have a track on the soundtrack of the new Dark Night: Arkahm City videogame, which also includes songs by Noel Gallagher, MGMT, Florence and the Machine, and Adele.

The show at Bowery Hotel is the KCRW-hosted It's A School Night party that also features US Royalty, Marcus Hall and Hands. It's free (21+) with RSVP.

You can watch the video for "Everybody's Under Your Spell" and video of The Duke Spirit's recent appearance on Later with Jules Holland after the jump.

--
Duke Spirit - Everybody's Under Your Spell