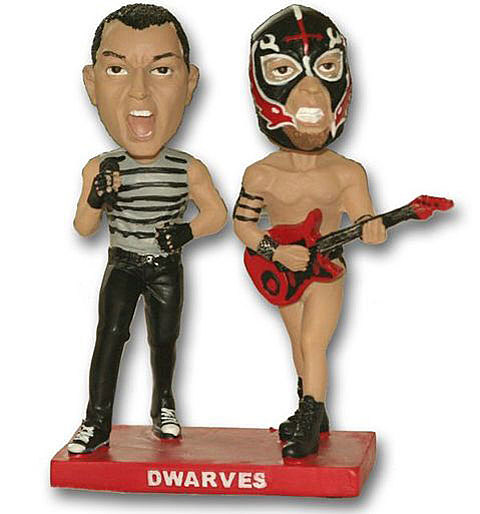 Trouble-making punks the Dwarves are hitting the road this summer, having scheduled a string of east coast dates that kick off on Thursday (June 17th) which will lead the band to NYC at Bowery Electric on June 20th with the Turbo AC's. Two days later (June 22nd), Blag will play a pair of solo acoustic shows at Generation Records (early) and The Local 269. In early July the band sets off for a string of west coast dates and prep for an August tour in the UK leading up to an appearance at the Kanalrock Festival in Norway.

The Dwarves don't have a new LP to show off, but guitarist HeWhoCanNotBeNamed does. The guitarist's new LP, Sunday School Massacre, hit store shelves last Monday and features appearances from many current and former Dwarves including Blag Dahlia, Nick Oliveri (Kyuss, Queens of The Stone Age), Andy Selway (KMFDM & The Spittin' Cobras, The Dwarves) and many more.

Some videos and full tour dates are below...

Dwarves - "We Must Have Blood"