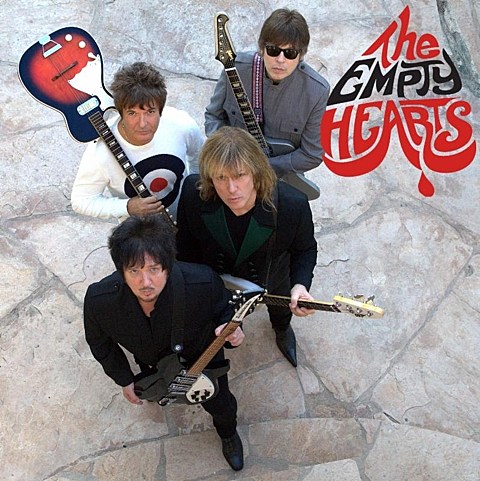 The Empty Hearts are a new-ish supergroup featuring Blondie's Clem Burke, The Cars' Elliot Easton, The Romantics' Wally Palmer and Chesterfield Kings' Andy Babiuk. With a lineup like that you may expect late '70s style power pop and that's exactly what you get on their self-titled debut LP that came out this past August. You can stream one of its tracks, "90 Miles An Hour Down A Dead End Street," below.

The band is also going on a short international tour in October which includes a NYC show happening on October 18 at Knitting Factory Brooklyn. Tickets for that show are on sale now. All dates are listed below.

Speaking of Blondie members, you may remember that Clem Burke also plays in another supergroup, The Split Squad. And former bassist Nigel Harrison (who played and wrote during the Parallel Lines - The Hunter era) and Portishead/Radiohead drummer Clive Deamer are backing Irish sibling trio The Rua on their upcoming 2015 album Essence and live including when they make their US debut at NYC's Subculture on October 23, part of CMJ. Tickets for that show are on sale now.

You can watch the video for The Rua's single "Fight For What's Right," with the Empty Hearts song stream and list of dates, below...

The Rua - "Fight For What's Right"