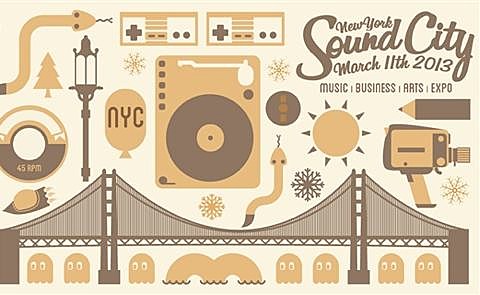 The UK/NYC music industry conference/concert known as New York Sound City (as opposed to Dave Grohl's Sound City documentary/concert that just happened) will return this year, happening March 11, 2012 at Knitting Factory. It's a diverse line-up (and not all from the UK) with appearances by Britrockers The Enemy, the danceable pop of Reverend & the Makers; Polish Pop Idol winner Brodka, and Liverpool bands The Tea Street Band, KOF, and The Verdict. Tickets are $20 and on sale now. Reverend & The Makers, The Enemy and Brodka will all be heading to SXSW immediately after.

The strong Liverpool showing reflects Sound City's origins, and you may remember The La's were supposed to headline the event last year but cancelled. As for the music industry side of New York Sound City, it's happening the same day at The Wythe Hotel and speakers include onetime Rolling Stones manager Andrew Loog Oldham, punk chronicler Danny Fields and hip hop artist Monie Love. And they'll be talking about:

The central theme of the New York Sound City will be the notion of British Invasion - how the relationship between New York and Liverpool, two great ports and hotbeds of music and creativity have shaped popular music for generations. A series of panels and seminars examining how the UK has consistently re-interpreted, re-invented and re-packaged subversive US music and culture and successfully sold it back to the American mass market.

More info on the industry conference is here and song streams from many of the bands/artists playing are below.

Reverend And The Makers - Out Of The Shadows