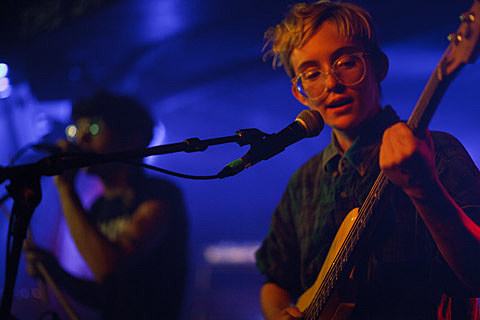 The Film Society of Lincoln Center's 'Sound and Vision' festival is keeping busy the rest of the year with a monthly called "Staring at Sound" that mixes film and live music. Tonight (2/19) at the Film Center Amphitheatre is the February edition and features the Brooklyn music collective The Epoch, which includes bands Eskimeaux, Bellows, Told Slant, Small Wonder, and Sharpless. The "entire collective" will be there tonight to "perform live and present visual works in various forms." Tickets are available.

In other FSLC news, Friday (2/20) at the Walter Reade Theatre, they're showing Electric Boogaloo: The Wild, Untold Story of Cannon Films, a documentary about the studio that, in the late '70s and early '80s, gave us such classics as Breakin', Breakin' 2: Electric Boogaloo, The Apple, The Last American Virgin, American Ninja, Over the Top, the many Death Wish films and more. (The film also focuses on Cannon's infamous studio heads, Menahem Golan and Yoram Globus.) The screening includes a Q&A featuring the director, The Apple star Catherine Mary Stewart, and others, and there's a cocktail party beforehand. Tickets are still available. Trailer for the film is below.

Meanwhile over at MoMA on Tuesday (2/24) they're screening a new music-related Scottish documentary, Tomorrow Is Always Too Long which is from director Phil Collins (not the Genesis singer) and features original songs by Cate Le Bon:

Over the last year Collins has been meeting people in maternity hospitals, schools, community groups, and social clubs for the elderly, asking them to sing songs, make predictions for the future, debate the status of freedom in today's society, guide us through the city's most famous prison, and dance like there's no tomorrow. These sequences are framed through an imaginary public-access network, one which, high on bad attitude and with just a hint of mayhem, makes an appeal to the epic pleasures of channel surfing and the potential for low-budget television to reinvent itself through its viewers and their take on life as we somehow still live it.