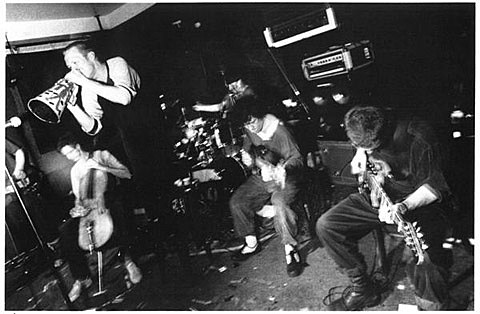 The Ex's music has undergone significant evolution over the years from their beginnings as a punk band. Founded in 1979 by singer G.W. Sok, guitarist Terrie Hessels, drummer Geurt and bassist René, the band debuted with a song titled "Stupid Americans" on the Utreg-Punx vinyl 7" compilation released by Rock Against records in Rotterdam. The release of their first 7" All Corpses Smell the Same followed shortly after that, in 1980. Through the decades their music has gradually developed into its current form of highly intricate, experimental punk/post-punk/no wave-inspired work.-[Wiki]

Celebrating more than 30 years as a band, The Ex will drop their 25th CD/LP release on their own Ex Records and 123rd overall release on January 25th, 2011. The record, called Catch My Shoe, features "Cold Weather Is Back" available for download above.

And less than two months after the release, The Ex will hit the road for a string of select North American dates in the first quarter of 2011, including a show in NYC at Le Poisson Rouge on March 10th with Liturgy. Tickets go on sale December 10th. 2010.

Liturgy played Acheron on Friday 12/3 with Orphan and Dope Body. Their only other upcoming show is their appearance at Roadburn (with Winter!). They are no longer playing the 12/9 show at Glasslands. Video from the Acheron show is below.

The Ex visited NYC in 2008 and played the Big Ears Fest in Knoxville earlier this year. All current dates and some videos below...

The Ex - Cold Weather Is Back