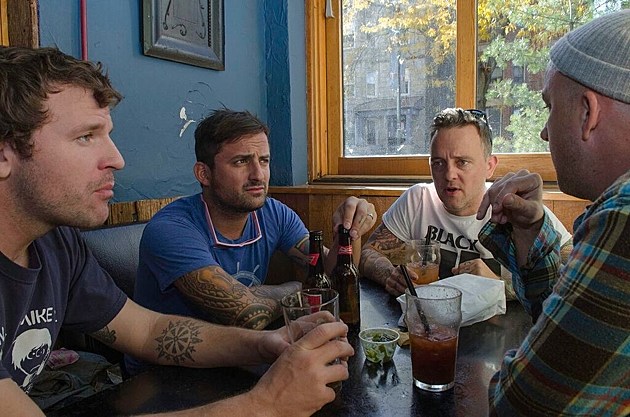 Punk supergroup The Falcon -- led by The Lawrence Arms co-frontman Brendan Kelly and currently featuring his Lawrence Arms bandmate Neil Hennessy on drums, plus Alkaline Trio's Dan Andriano and The Loved Ones' Dave Hause -- recently announced that Gather Up The Chaps, their first new album in a decade, would be out March 18 via Red Scare (pre-order). We've got the premiere of the album's new single "War Of Colossus," and if you generally like Brendan Kelly's projects you're gonna dig this too. It's lyrical, singer/songwriter-y punk, but don't let that fool you into thinking it doesn't have a serious bite. Check out the lyric video below. Here's what Brendan tells us about the song:

Well, I really hate the idea of putting my intentionality into any song I write because usually, whoever's listening can come up with a better, more relevant-to-them interpretation of the lyrics than my dumb ideas, and I hate dictating what anyone could potentially take away from a song. I'm no goddamn authority on anything. I WILL say that a lot of this record is about chasing insane highs through self-destructive means and the resulting deep, dark lows that result from that--the battle of these two opposite forms of self loathing. Anyway, unrelated: I was watching a nature show with my kids and it was about a giant squid and a sperm whale fighting. This only happens waaaaaay down deep, too far for humans to observe, in the darkest of darkness. From what little we know, the fights are ruthlessly savage--two leviathans ripping each other apart. It was completely fucking fascinating. Who knows what monsters and wars lurk below the surface? Shit like that. That's it. Enjoy the video. I think our man Kyle did an awesome job.

As mentioned, the band will also tour in support of the album, including a NYC show on April 3 at Shea Stadium with The Lippies and The Scandals. Tickets for that show are still available. All dates are listed below.