The Field at Pitchfork Fest 2012 (more by Chase Turner) 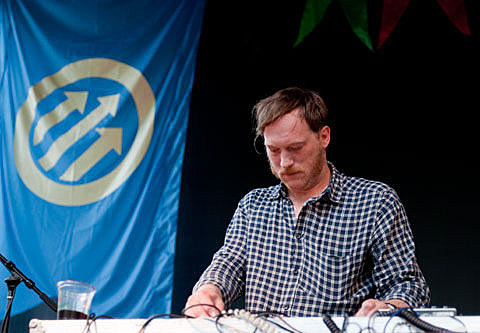 The Field (aka Stockholm electronic musician Alex Willner) is set to come over to North America for Montreal's Mutek festival this year, which he plays on May 29. Then, he'll stop in NYC for a show the next day at Glasslands (5/30) before heading to Austin for Chaos in Tejas on June 2. Tickets for the Glasslands show are on sale now. Those are his only North American dates that we're aware of at the moment, but he does also play the Yeah Yeah Yeahs-curated ATP in the UK on May 4.

Tickets for Mutek are still available too. That festival runs from May 29 to June 2, and you can check out the day-by-day schedule HERE.

The Field has been doing some interesting official remixes this year, including one of Tame Impala's "Mind Mischief," which is out now, and another less-expected one of At the Drive-In's "One Armed Scissor," which comes out on 12" vinyl on May 13 via Transgressive. You can stream both of those remixes below...

At The Drive-In - "One Armed Scissor" (The Field Remix)