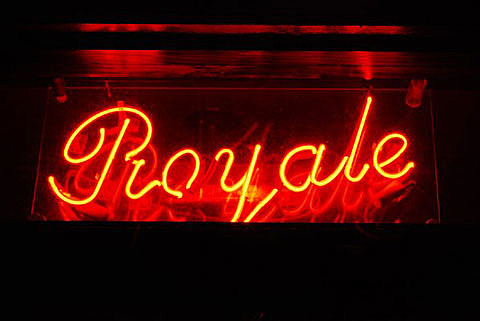 I honestly didn't even realize Brooklyn bar/club Royale closed. Their website is still up even, but a new business is already planning on opening open in the space located at 506 5th Ave in South Park Slope. The new venue ("performance space") is called The Fifth Estate and they have a "grand opening" scheduled for October 1st (they are open already) ("it had a soft opening a month or so ago.")

A press release they just sent me can be read below...

--
BROOKLYN GETS A NEW PERFORMANCE SPACE
GRAND OPENING of THE FIFTH ESTATE
Friday, October 1, 4 pm to 4 am

The Fifth Estate, a new bar and performance space located at 506 5th Avenue in Park Slope, Brooklyn will be enjoying its official grand opening on Friday, October 1st. The venue is a true „gem in the rough. according to owner Peter Lederman. "Our mission is to foster a grass roots community for musicians and other creative folks where they can flaunt their stuff in a casual and intimate setting."

A typical evening at The Fifth Estate includes live music featuring local and touring talent. Later at night it becomes an "electric laboratory" for some of the most talented DJs in the NYC area and elsewhere. The after-hours environment allows them to experiment with their craft and diverge from the ordinary. Fifth Estate should prove to be one of the best stomping grounds for artists and free-thinkers, a place they can call home. The grand opening will include music all day and night, topped off with the live local band, Boomclique. The rest of the night will include an array of local musicians and DJs.

From the classical white columned back bar, to the iconographic zebra wallpaper, The Fifth Estate harkens back to some of the great New York Empire bars of the past. Attention to old fashioned service is held in the highest regard. That plus a focus on traditional alcohols and cocktails makes for the classic bar experience, providing a great contrast to the edgy music coming from the performance space in the back. The taps will focus on a variety of delicious local New York state microbrews. The collection of bottled beer will keep the out-of-state and international community happy and well-quenched.