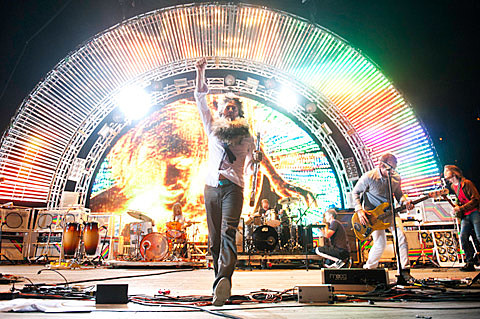 The Flaming Lips will be touring internationally this year, beginning with their big shows in Austin for SXSW this month, and they'll make their way to the NYC area for a show on May 16 at The Wellmont Theatre in Montclair, NJ. Tickets for that show go on sale Friday (3/8) at noon. All tour dates are listed below.

The tour is in support of their thirteenth full length album, The Terror, which is due out on April 2 via Warner Brothers. The Terror is a depressingly existential concept album about the relationship (or lack thereof) of life and love. "We want, or wanted to believe that without love we would disappear," explains Wayne Coyne in a press release, "The Terror is we know now, that even without love, life goes on... we just go on... there is no mercy killing." It's the kind of concept that we can imagine being taken on by a band 30 years into their career, and impressive to see the Lips doing something like this rather than copying their old sounds or fading away.

Musically, it's one of the band's noisiest albums since the '90s, with their multi-layered psychedelia tightly packed into a claustrophobic container of sound. Like last year's The Seer by Swans, it's the type of record that takes you on a trip for the entire listen, but while Swans took you deep into the underworld, The Flaming Lips take you to Mercury, or year 3,000, or both. And while it's more of an album-album than a song-album, it's worth mentioning that The Terror's goal is best executed on its 13+ minute centerpiece; the wildly psychedelic "You Lust."

All tour dates are listed, along with a video of The Flaming Lips performing "You Lust" live with Phantogram, and a recent pitchfork documentary on their 1999 classic The Soft Bulletin, are below...