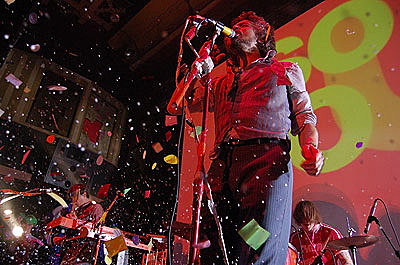 The Flaming Lips are playing a free show on Sunday, April 19th in the National Mall in Washington, D.C. The Earth Day Network/Green Apple Fest show also has moe., Los Lobos, DJ Spooky and others on the bill. Chevy Chase is acting as emcee, and the entire event will be streamed online, from 1-6pm that day, via EarthDayTV.net

Other cities, including New York, will also be hosting Green Apple Earth Day weekend events on April 17th - 19th. So far, the only official NYC concert planned is an Earth-Day-volunteer-only "thank you" show with Deep Banana Blackout at the Bowery Ballroom on Sunday, April 19th.

Also this summer, the Flaming Lips will be playing the Pitchfork Festival on Sunday, July 19. The band is also co-curating and headlining a night of ATP NY in September.

The Flaming Lips, moe., Los Lobos and others will perform during Earth Day On The National Mall by Earth Day Network in partnership with Green Apple Festival Day in Washington DC on Sunday, April 19, 2009. The free event on the National Mall will be emceed by actor Chevy Chase and will also feature performances by DJ Spooky, the Howard University Drummers and the Joy of Motion Dance Center's teen hip hop company, Urban Impact. Additionally, Kathleen Rogers, President of Earth Day Network, actor Matthew Modine, Philippe Pierre Jacques-Yves Arnault Cousteau Jr., Rep. Edward Markey, U.S. House of Representatives among others will speak throughout the day. The theme of the day is the Green Generation - a campaign including renewable energy, green jobs and a new green economy. More on Earth Day is available at www.earthday.net

Earth Day on the National Mall is the flagship event in a coordinated country-wide undertaking over Earth Day Weekend 2009 of Environmental Volunteer Actions and music in DC, New York City, Boston, Atlanta, Chicago, Denver, Austin, Los Angeles, San Francisco and Seattle to allow civic and environmentally-minded Americans to give back to their communities while restoring and renewing the Earth. Volunteer events are listed at www.greenapplefestival.com - from there link to www.PlanetGreen.com to sign up.

Attended by over 200,000 last year, the Festival has grown from eight cities to ten cities in 2009 and emphasizes environmental volunteerism in solidarity with the new administration's "call to service".

Volunteers in Green Apple cities outside DC will be treated to "Thank You Concerts" at indoor venues with popular artists performing "with friends" on the evening of April 19th, 2009. In Atlanta, GA - Galactic & Friends with opener Victoria George at Variety Playhouse; In Austin, TX - Travis Tritt & Friends at Antone's *(on Monday April 20); In Boston, MA - Soulive & Friends at Paradise Rock Club; In Chicago, IL - Cracker & Friends at The Metro; In Denver, CO - Ivan Neville's Dumpstaphunk & Friends at Cervante's Masterpiece; In Los Angeles, CA - The Hotel Cafe Presents Cary Brothers & Friends at The Roxy; In New York City - Deep Banana Blackout featuring Fred Wesley & Friends at Bowery Ballroom; In San Francisco, CA - BassNectar & Friends at Slim's; In Seattle, WA - The Blue Scholars & Friends at The Crocodile. For information about each performer, showtime and venue location, visit www.greenapplefestival.com

Earth Day 2009 events are a kick-off to the 40th Anniversary of Earth Day which will culminate in April 2010 with Global Days of Service on April 17-18, 2010, a Global Day of Action on April 22, 2010 -- the 40th anniversary of Earth Day -- when participants will ask their governments to take specific environmental action; followed by a Global Day of Celebration on April 25th, 2010 marked by 40 simultaneous music and rally events across the world focused on the theme of "The Green Generation".

ABOUT EARTH DAY NETWORK: Earth Day Network was founded on the premise that all people, regardless of race, gender, income, or geography, have a moral right to a healthy, sustainable environment. Our mission is to broaden and diversify the environmental movement worldwide, and to mobilize it as the most effective vehicle for promoting a healthy, sustainable environment. We pursue our mission through a combination of education, public policy, and consumer activism campaigns. Our campaign and programs are predicated on the belief that an educated, energized population will take action to secure a healthy future for itself andits children. Earth Day Network has a global reach with a network ofmore than 17,000 partners and organizations in 174 countries. More than1 billion people participate in Earth Day activities, making it the largest secular civic event in the world.

ABOUT GREEN APPLE FESTIVAL: Now in its fourth year, the Green Apple Festival began in New York City as an environmental and music event and has grown to become the country's largest coordinated and interactive Festival dedicated to observing and preserving the environment. From its origins in 2006 as a New York City event, through last year's expansion to eight cities with an overall attendance of 200,000, organizers now will present an impactful series of community projects in ten cities to unite individuals, families and civic leaders in making greener life choices and stemming the tide of climate change. Green Apple Festival was founded by executive producer Peter Shapiro and Zenbu Media, a music media company. Since 2007, Green Apple Festival has worked closely in partnership with Earth Day Network.