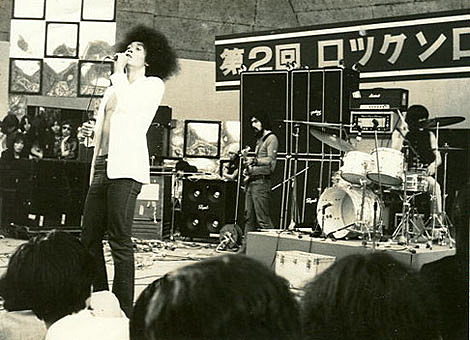 OK. I literally almost fell out of my chair when I saw this one..... the Knitting Factory NYC booked two nights of the legendary Japanese Psych/Doom/Alloftheabove prog rock of Flower Travelling Band! Their first two US dates EVER. 40 years later. Here's what allmusic had to say about Flower Travellin' Band and their classic LP Satori:

Flower Travelling Band was Japan's answer to Led Zeppelin meeting Blue Cheer and Black Sabbath at the Ash Ra Temple. Simply put, they played grand, spacey, tripped-out hard rock with a riffy base that was only two steps removed from the blues, but their manner of interpreting those steps came from an acid trip... From power chords to Eastern-tinged, North African, six-string freakouts, to crashing tom toms, to basses blasting into the red zone, Satori is a... new sonic universe constructed from cast-off elements of the popular culture of the LSD generation. Forget everything you know about hard rock from the 1970s until you've put this one through your headphones. It's monolithic, expansive, flipped to wig city, and full of a beach blanket bong-out muscularity. In other words, this is a "real" classic and worth any price you happen to pay for it.

Thats an endorsement. Grails have covered Flower Travellin' Band's "Satori" on their Interpretations EP, and will join Silver Apples, Arbouretum, Dinowalrus, Nudge, and others to open the first night (Nov 22nd) of the three floor event entitled "Third Annual Halleluwah Festival of Enthused Arts" at Knitting Factory. The next night, Nov 23rd, look for Hard Bop, Apse, Talk Normal, Nancy Garcia (of Monotract), and others to kick things off.

Flower Travellin' Band reunited in January of this year, playing a handful of shows in Japan, including the Fuji Rock Festival. The band dropped the NEW album We Are Here on Sept 17th via Pony Canyon Records. Featuring eight new tracks, you can stream three of them here.

Flower Travellin' Band was recently profiled in Julian Cope's Japrocksampler, where Cope named their classic LP Satori as his favorite "Japrock" record ever.

Apse recently played ATP NY and have another NYC show scheduled at Death By Audio on November 21st.

All tour dates, the festival flyer and a bunch of videos below... 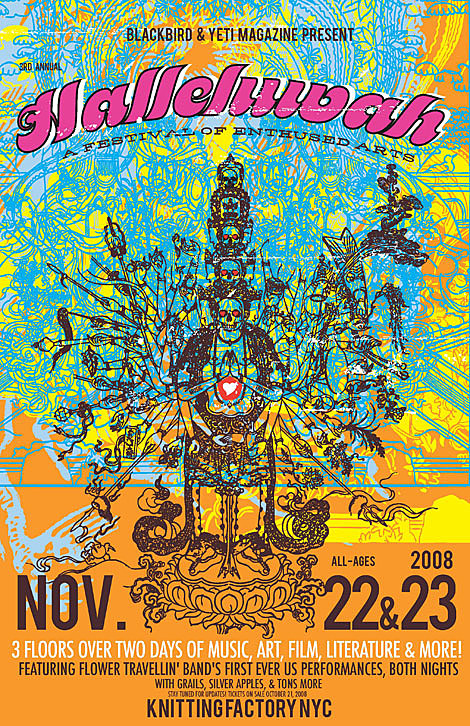