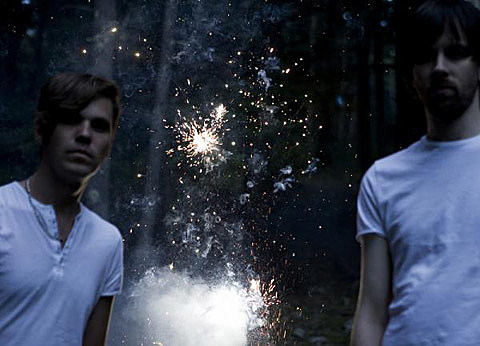 The Forms, who we interviewed a few short months ago, have a double LP due on February 15th via Triple Down Records/Threespheres, with the CD coming through Ernest Jenning. Half of their release is their new Derealization EP which includes revisited/remixed works and features appearances from Matt Beringer (The National), Craig Wedren (Shudder To Think), as well as members of Pattern Is Movement, Dirty Projectors, St. Vincent and others.

The 2-disc set will also include the band's earlier Steve-Albini-produced opus, Icarus. Download "Steady Hand", a fresh look at "Bones" from Icarus above, and stream it below where you'll also find the full EP tracklist. EP opener "Fire to the Ground" with Matt Berninger has especially been stuck in my head since listening recently.

The Forms are scheduled to play NYC at Cameo Gallery on Saturday (12/18), one of a few dates that the band has on their schedule that includes a Boston date with The Dismemberment Plan. That Boston show is the day before The Dismemberment Plan plays to a sold-out Webster Hall in NYC twice (1/29 and 1/30).

The Dismemberment Plan have also added dates to their reunion tour which now includes three DC dates and a March one in Seattle.