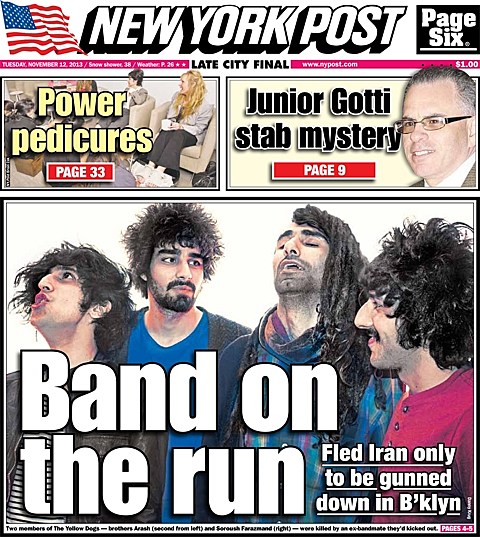 After yesterday's confusing, sad news that members of Yellow Dogs were murdered by Raefe Ahkbar, former apparently disgruntled member of Yellow Dogs' "sister band" The Free Keys, the surviving members Koory and Obash have paid tribute to their bandmates, though briefly for now and via social media. On Facebook, they wrote "Thanks every one for all your prayers and condolences. We still can't believe this tragedy . R.I.P Arash Farazmand, Soroush Farazmand , and Ali Eskandarian." They also tweeted "Still in shock, we lost 3 of our brothers, Soroush Farazmand, Arash Farazmand and Ali Eskandarian, Rest In Peace."

Other bands have paid tribute too, like Black Lips, who posted a message yesterday, and Bear In Heaven, who tweeted, "Got the news about The Yellow Dogs at 830am from an old friend. Instantly sad, now feels totally tragic. Unprecedented. :/"

Now, a message has also been posted by The Free Keys, Yellow Dogs' sister band and former band of the shooter. They write, "We are shocked and heartbroken. We lost our family which we spent our lifetime together. Arash and Soroush were my true brothers. Thank you to everyone for the support. I don't know what I can say."

The Free Keys don't mention Ali Eskandarian by name. Ali is also the one that every news story claims is not in the Yellow Dogs, but according to recent interviews and pictures we found yesterday, he was also in the band, at least for a little while, and as recently as March.

Meanwhile, another detail on the shooting emerged that the gunman had 100 rounds of ammo on him. Police were said to have found 81 unfired rounds and some magazines in a guitar case on the roof where the shooter killed himself.

Pictured above is today's NY Post's new cover where the band is pictured with the sensationalist headline, "Fled Iran only to be gunned down in B'klyn." If you were wondering why they left Iran to begin with, you can take a look at the intriguing but sad cable released by WikiLeaks that details the trouble they faced for being a rock band by the Iranian government, which caused them to apply for US visas in 2009.

Watch a video by Yellow Dogs below...