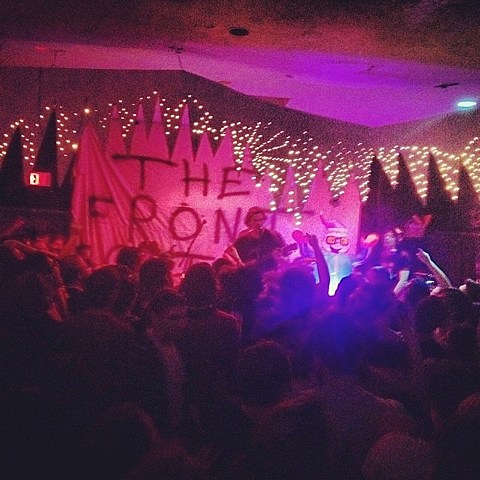 We're still playing catch-up a bit now that the holidays are over, and in light of that, here's a somewhat belated recap of our BrooklynVegan holiday party at Shea Stadium on December 28 with The Front Bottoms, Chris Gethard and Tiny Moving Parts.

Tiny Moving Parts opened the show, and I admittedly was only vaguely familiar with their record going into it, but it was pretty hard not be won over by their great-spirited, intensely delivered mathy post-hardcore. Much of the crowd also seemed unfamiliar, but almost no one looked unimpressed. They were followed by comedian Chris Gethard, who hosted our Bouncing Souls and Foxygen shows earlier in the year, but this time was doing a full set. He began it with the premise that nobody wants comedy at a rock show, and was proceeded by multiple planned "interruptions" from "crowd members" who "thought they could do a better job."

Eventually, Front Bottoms singer Brian Sella walked on stage and asked, "are you sick of this guy yet?" and he was then joined by his band for a super fun headlining set. They had played a sold-out NYC show at the much larger Bowery Ballroom a day earlier, so needless to say this show at the dingy Shea Stadium was PACKED, sweaty, and exactly the kind of way you'd want to see The Front Bottoms. The whole crowd went nuts, moshing, stage diving, and shouting basically every single syllable back at Brian. The guys in Tiny Moving Parts came back on stage to sing one of Front Bottoms' songs with them, they had tons of props like big inflatable creatures in the back of the stage (including a snowman), and Gethard and some other people threw balloons and light sticks into the crowd during the songs. If you came, we hope you had as much fun as we did.

The Front Bottoms are about to hit the road with You Blew It!, and the closest that tour comes to NYC is a Long Island show on January 30 at 89 North (tickets). Meanwhile, you can catch You Blew It! in NYC when their tour with Prawn hits Shea Stadium on 2/8 with Crying and Living Room. YBI! are also streaming their new record on Pitchfork.

Check out a video of The Front Bottoms playing "Santa Monica" and a clip of "The Fued" from the Shea show, below...