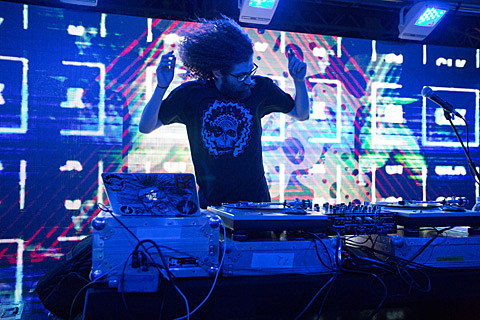 The Gaslamp Killer doesn't have too much on his North American tour schedule this year, other than a few festivals like The Roots Picnic in Philly (6/1), Do Division in Chicago (6/2), and Sled Island in Calgary (6/19-22). As he makes his way east for the Roots Picnic, he'll stop off in NYC the day before for a show at Music Hall of Williamsburg (5/31). Tickets for that show go on sale Friday (5/3) at noon with an AmEx presale starting Wednesday (5/1) at noon.

In other Brainfeeder news, we just mentioned that Flying Lotus' rap alter-ego Captain Murphy is making his NYC debut on Tuesday (4/30) at the same Brooklyn venue for the Brainfeeder showcase which also features Erykah Badu DJing, The Underachievers, Teebs, Azizi Gibson, and PBDY (sold out). And we're also giving away tickets to the Flying Lotus/Thundercat/Ultraista shows at Terminal on 5/5 and 5/6.

All North American Gaslamp Killer dates are listed, along with the video for "Seven Years of Bad Luck for Fun" from his 2012 LP, Breakthrough, below...