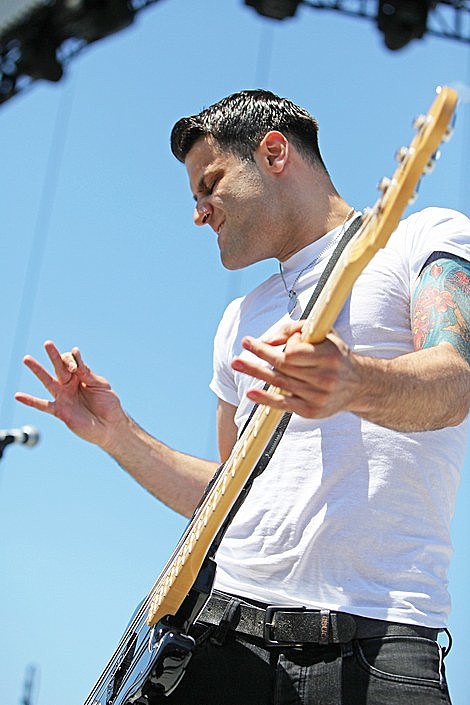 "[Murder by Death] is great, and they were so different from the other bands on the bill, it really stood out as a fresh performance. Turla told a story about being in San Francisco to open for The Pogues, and how he was driving around with Shane McGowan, drinking port, and looking for a salsa bar. "Just imagine that man salsa dancing." Imagine, indeed. A highlight of their set was when Turla did a solo performance of "Bang Bang (My Baby Shot Me Down)," the oft covered Cher classic. This was evocative mood music, and it evoked a mood of "these people are cool" throughout the whole building.

The Gaslight Anthem entered the stage to a recording of Bo Diddley's "I'm a Man" and then blasted right into their set opener, "High Lonesome." The Gaslight Anthem are often lumped in as a punk band with a serious Springsteen influence, but I think this sells them short. Brian Fallon, the lead singer, used to be in a band called This Charming Man, and this duality where there is love for both the lyrical style of Bruce Springsteen, and also the sound of classic British pop makes for a great combination. You can't listen to "Old White Lincoln" without immediately hearing The Cure. But when he sings about America, cars, girls, and dreams, you hear the words of Springsteen's New Jersey." Spinning Platters]

That review comes from The Gaslight Anthem and Murder by Death's September 20th show at the Fillmore in San Francisco, part of their four-band tour that hits Terminal 5 in NYC on October 15th. As previously noted, Jesse Malin and Broadway Calls are the other two bands in NY (openers switch a few times during the tour), and All Points West ticket holders get a free drink at the NYC show (due to Gaslight getting knocked off the APW bill due to rain).

Tickets to the NYC show are still on sale, AND I have two pairs to give away, AND I have Gaslight prizes for eight more people after that. Details, tour poster and dates below....

The Gaslight Anthem - "The '59 Sound" Side One Dummy 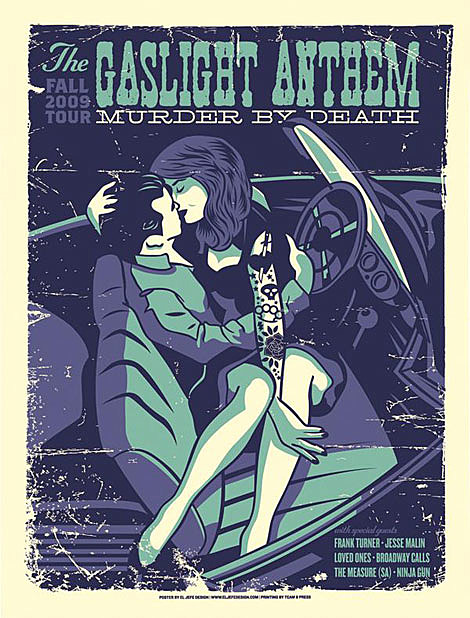 CONTEST: We have the following prizes to giveaway:

We'll have ten winners total. Two grand prize winners will get everything: two tickets, a record, and a t-shirt. Eight runner-ups will get a t-shirt and a record each.

To enter: E-MAIL: BVCONTESTS@HOTMAIL.COM (subject: Gaslight tickets OR Gaslight NO tickets). In other words, if you want everything, make the email subject "Gaslight tickets" and you'll have a chance to win everything. If you can't make the show, but still want a chance to get the other stuff, your subject should be "Gaslight NO tickets". Also include your first and last name and age in the email. TEN WINNERS will be picked randomly and contacted with more information, and a request for their address so the stuff can be mailed to them.