The Gaslight Anthem at ACL 2014 (more by Tim Griffin) 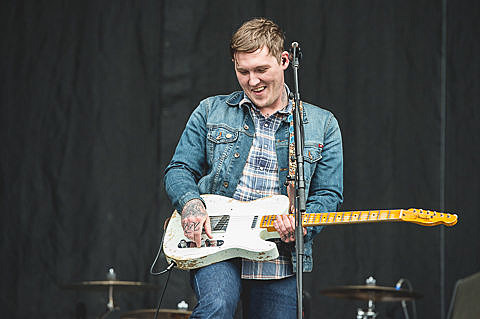 The Gaslight Anthem continued their shift from heartland punk to Alternative Rock on this year's Get Hurt, their fifth album which came out a few months ago on Island. They supported that on a tour which came close to NYC for big amphitheater shows in Philly and NJ, but didn't hit NYC itself. Now the band has announced more dates for 2015, including a stop here happening February 28 at Terminal 5 with Northcote and The Scandals. Last time they played T5 it was a three-night run, so it probably won't take long for this one to sell out. Tickets go on sale at noon on Friday (12/12) with a BrooklynVegan presale starting noon on Wednesday (12/10). Check back here Wednesday morning for the password.

This month, Gaslight Anthem frontman Brian Fallon also plays three sold-out solo shows in NJ. You can also catch The Scandals in NYC this month with Iron Chic and I Am the Avalanche.

The Gaslight Anthem also recently made a video for "1,000 Years" from the new album. You can watch that, with the list of dates, below...