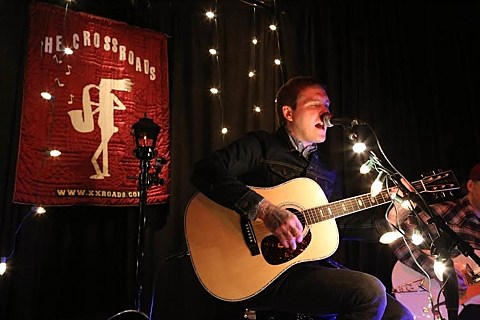 The Gaslight Anthem are taking some time off and frontman Brian Fallon is releasing a solo album Painkillers on March 11 via Island. He just played with four intimate NJ shows at Crossroads, a secret/unannounced gig on 12/2 (photo above) followed by shows on 12/3, 12/4 and 12/5 that sold out well in advance. At those shows he debuted the album's song "Low Love," a ballad that would've fit nicely on Gaslight's last album Get Hurt. You can watch a high-quality live video below.

Today he put out the first studio song from the album, "A Wonderful Life." This one's more upbeat, a mid-tempo rocker with just a few hints of Springsteen's prime era. Listen below (via Wall Street Journal). He recorded it (and the rest of the album) with Mark Stepro on drums and Butch Walker on guitar/production.

Brian's going on a tour this winter, which hits NYC at The Studio at Webster Hall on January 19. That show's sold out.

UPDATE: Now Brian's announced even more dates through late April, including a larger NYC show on March 9 at Irving Plaza and a NJ show on March 12 at Starland Ballroom. Ticket info for NYC coming soon and tickets for NJ go on sale Thursday (12/17) at noon.

Updated dates are listed, with the new songs, below...