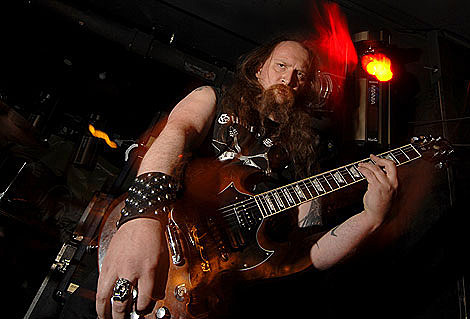 BrooklynVegan and 1000Knives are proud to present the return of The Gates of Slumber with the amazing Hour of 13 at Union Pool on Oct 16th! One more band is TBA, but $10 will get you in the door.

After two fantastic LPs, 2007's eponymous release on Shadow Kingdom and this year's The Ritualist on Northern Silence, Hour of 13 will present their material for the first time to North American audiences at the show. If you are a fan of doom then you are most likely aware of Hour of 13, and if you aren't aware of them then I urge you to pick up The Ritualist ASAP! Killr record.

Doom gods The Gates of Slumber played the Attitude Adjustment party at Red 7 during SXSW, and are touring off of their killer LP Hymns of Blood & Thunder released in the tail end of 2009, as well as The Hyena Sessions EP, released in March.

All Gates dates, and some videos are below...

--
THE BRINGER OF WAR -- THE GATES OF SLUMBER

DEATH DEALER -- THE GATES OF SLUMBER