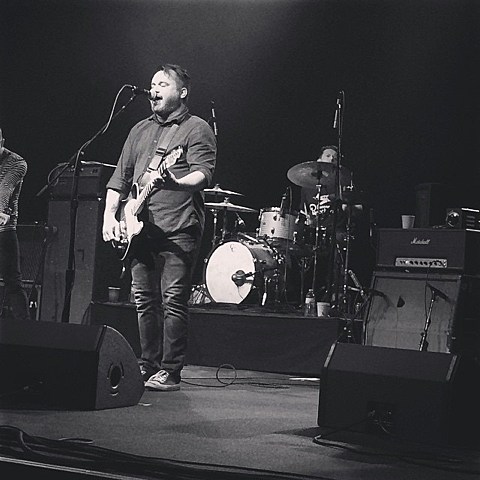 '90s-era don't-call-them-emo greats The Get Up Kids are currently celebrating their 20th anniversary as a band, and thanks to guitarist/vocalist Jim Suptic's spring break -- Matt Pryor told the crowd at Long Island's Paramount on Saturday (3/28) that Jim is going back to school "to become a scientist" (a detail Jim seemed to argue was not entirely factual) -- they were able to squeeze in a short tour last week. The Paramount show was one of two NYC-area stops on the tour (the other being NJ's Stone Pony a day earlier), their first shows in the area since playing MHOW and Webster Hall in 2011.

The band's first two and most classic albums are both over 15 years old, and Matt Pryor went on to make folk music and children's music, but he and the rest of TGUK gave those old songs as much spirit this past weekend as they have on the records. It was a super fun, nostalgia-filled night loaded with such favorites as "Holiday," "Red Letter Day," "No Love," "Don't Hate Me," "Action & Action," "Ten Minutes," and so many more. The crowd was loving them too (even a few bartenders and bouncers were singing along), and everyone on and off stage was smiling the whole night. Really great show.

Philly rockers Restorations at The Paramount, opening for The Get Up Kids #restorations #paramount

The night wasn't just about nostalgia though. The Get Up Kids had two great newer bands (both of whom are at least vaguely similar in sound) open the show. The first of these was Philly's Restorations, who released their third and so far best album, LP3, last year. Restorations take the kind of whiskey-soaked, world-weary songwriter punk of bands like Lucero and Hot Water Music, and they give it the kind of atmospheric edge you may develop if you rock Swans, Nils Frahm and A Winged Victory for the Sullen in your van between punk shows. Not to throw around the word "mature," but that's what Restorations' songwriting is, and their live show felt like it came from a band who'd been around twice as long. You can catch Restorations in NYC next (and I would recommend doing so) on their tour with Get Up Kids lovers The Early November, which hits Bowery Ballroom on 6/2 (tickets).

PUP on now at Paramount, Get Up Kids next #pup #paramount

Restorations' SideOneDummy labelmates PUP, who played after them, gave off almost the exact opposite vibes. Their songs are youthful, and they play with the wide-eyed enthusiasm of a band who's just getting out of the basement. (Not saying one of these things is better or worse.) But the basement seems like the last place PUP belong. They clearly have an equal love of punk and pop, and they take on every stage I see them at like they're the headliners. Considering the amount of people who knew the words to their set on Saturday, it doesn't seem unlikely that one day they will be.

We didn't get The Get Up Kids' full setlist from either NYC-area date (anyone have it?), but you can watch a video of them playing "Ten Minutes" at the NJ show, below...