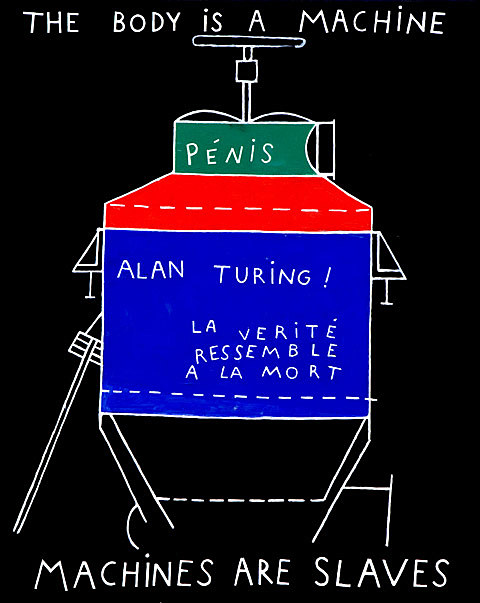 Opening at the New Museum in July 2012, "Ghosts in the Machine" surveys the constantly shifting relationship between humans, machines, and art. Occupying the Museum's three main galleries, the exhibition examines artists' embrace of and fascination with technology, as well as their prescient awareness of the ways in which technology can transform subjective experiences.

International in scope, the exhibition spans more than fifty years and incorporates works by contemporary artists. The works assembled trace the complex historical passage from the mechanical to the optical to the virtual, looking at the ways in which humans have projected anthropomorphic behaviors onto machines that have become progressively more human. In place of a traditional, chronological approach, "Ghosts in the Machine" is conceived as an encyclopedic cabinet of wonders: bringing together an array of artworks and non-art objects to create an unsystematic archive of man's attempt to reconcile the organic and the mechanical.

The installation at the New Museum will include artists, writers, and visionaries whose works have explored the fears and aspirations generated by the technology of their time. [New Museum]

The "Ghosts in The Machine" exhibit opens today (7/18) at the New Museum and lasts through the end of September. To help commemorate the opening, the Museum has scheduled a pair of events to coincide with its centralized theme, the first of which is a discussion between artist Otto Piene and curator Massimiliano Gioni tonight (7/18).

The second and final event will feature a performance from eclectic alternative hip hop crew Anti-Pop Consortium. Look for the Beans-less crew (he's no longer listed as a member on their Facebook fan page) to take to the New Museum on July 27th, tickets are on sale.

Before that, High Priest of Antipop will perform at the New Museum's Block Party which happens Saturday (7/21) in Sara D. Roosevelt Park. Also performing are Chris Giarmo/Boys Don't Fight, Yvonne Meier and Sxip Shirey. The block party goes from noon - 5PM and all attendees get free admission to the New Museum that evening.

Details on some of the participating artists and events scheduled for the exhibit are below.

"Ghosts in the Machine" is curated by Massimiliano Gioni, Associate Director and Director of Exhibitions, and Gary Carrion-Murayari, Curator.

An evening devoted to an intergenerational conversation about art and technology between artist Otto Piene and exhibition curator Massimiliano Gioni. Otto Piene (German, born 1928) is a leading figure in kinetic art and one of the founding members of the group ZERO, initiated in 1957. Central to Piene's art practice are connections between art, technology, and nature. In 1974, he succeeded György Kepes as the director of the Center for Advanced Visual Studies at MIT where Piene established MIT as an important locus internationally for furthering the union of art and technology. Massimiliano Gioni is Associate Director and Director of Special Exhibitions at the New Museum, New York. He curated "Ghosts in the Machine," with Gary Carrion-Murayari and he is currently organizing the 55th Venice Biennale opening in summer 2013.

Antipop Consortium is an alternative hip hop ensemble based in New York. Conceived in 1997 out of a series of daring collaborations at the "Rap Meets Poetry" sessions of the Nuyorican Poets Café, the group has developed a cerebral, visionary strain of hip hop that incorporates the fragmented rhythms of contemporary electronic music with the confrontational, interrogative stance of rap.

To coincide with the New Museum's summer exhibition, "Ghosts in the Machine," Antipop Consortium will give a special performance exploring the deeply human possibilities of electronic musical equipment. Building upon this longstanding priority for the group (member High Priest released an EP in 2000 titled Ghost in the Drummachine), Antipop Consortium's New Museum debut will showcase the group's dedication to innovation, boundary-smashing, and righteousness.