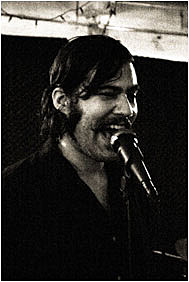 The Giraffes frontman (and Knitting Factory Staffer) Aaron Lazar was stricken with a double heart attack a few weeks back (btw there were no drugs involved) leaving him with hospitable bills estimated at about one million smackers. On this night the best of NYC rock come together to lend a hand to one of its finest.

"The Giraffes are uhm unique? Despite what I had seen when they were offstage, I thought this might after all be just an act, and not necessarily an original one. But that sure was a bottle of Jack Daniels they were passing around on stage before, after and during songs. I could smell it. And maybe that joint was really just a rolled cigarette, but they were still blatantly breaking the law, Breaking The Law ... and there was also no doubt they were seriously and severely fucked up. Theres a theory that a great frontman for a rock n roll band has to be at least 50% jackass to carry it off effectively. Whether tossing his drink cup at fellow band members, spilling it into the crowd or flicking his lit cigarette towards the crowded bar, Aaron Lazar filled the bill with percentage points to spare. Playing the loveable Lucifer, Lazar is charming and clever as hes being cunning and cruel. Imagine an unpretentious Jim Morrison or Henry Rollins who just happen to be smashed out of their heads. The band behind him - a cross between the best/worst of Motorhead and Metallica. Yet even with Damien Paris screaming, over the top lead runs, Drew Totolos kick-ya-in-the-nuts drumming and John Rosenthals bad-ass bass, youd be wrong if you labeled the Giraffes a metal band. It just isnt that easy with Lazars crafty delivery in the mix." - Neon NYC

photo via the Giraffes