The Gories, Amsterdam May 1992 Photo by Willem Kolvoort 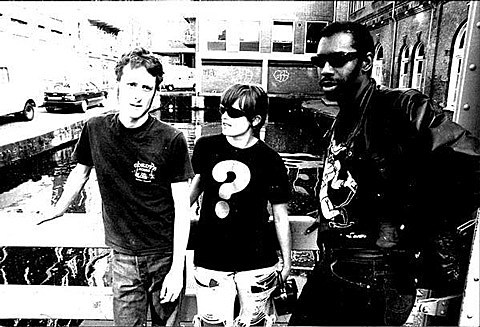 The emergence of The Gories heralded a new Golden Age of Detroit rock beginning in the late '80s; a renaissance of noise and rustbelt rock which lasts through to today. Formed in 1986 by three Detroit natives, none of whom previously knew how to play an instrument -- Mick Collins, Margaret Ann O'Neill (Peg), and Dan Kroha -- they took their name from a band of the same name which appeared in the "Gidget" series of the late '50s/early '60s. Comprised of two guitarists and a drummer (i.e. no bass), the Gories concocted a primal, raw yet soulful blend of garage punk, culling a wealth of inspiration and cover material from Bo Diddley, Howlin' Wolf, and John Lee Hooker. The three-piece also paid homage to the Keggs and Nick and the Jaguars, two other bass-less bands from Detroit.

Since the demise of the Gories, Mick Collins has continued to perform in Blacktop, King Sound Quartet, the Screws, the Dirtbombs, and has contributed to Andre Williams' Silky and The Black Godfather and Speedball Baby's Uptight. Dan Kroha spent some time in Rocket 455, but is primarily known for being one third of another Detroit bass-free rock band, the Demolition Doll Rods. Peg O'Neill recorded a few tracks with '68 Comeback and is in the Darkest Hours from New Orleans. -[allmusic]

The Gories reunited last year for a tour that included shows in their native Detroit, Memphis, and Europe with the also-reunited Oblivians. They'll hit the road this summer for a string of dates including three NYC-area shows: July 29th at Maxwell's (tickets on sale Friday at noon, ), July 30th at Bowery Ballroom (tickets on AMEX presale NOW, general sale Friday at noon) and July 31st "Outdoors at The Lincoln Center".

One of their non-NYC dates is the Ottowa Blues Festival which, over twelve days, will feature a star studded lineup of bands including Arcade Fire, Bear in Heaven, Rush, Iron Maiden, The Flaming Lips, Blonde Redhead, Weezer, Jimmy Cliff, The Swell Season, Passion Pit, Metric, Hole, Elvis Perkins in Dearland, and many others across multiple venues. For more details, check out the Ottowa Blues Festival site.

On a somewhat related note, Reigning Sound play Maxwell's on June 20th and Southpaw on June 19th, and Jack Oblivian will be back at the Brooklyn venue on July 21st.

Full Gories tour dates and some videos are below...

The Gories - Land of A Thousand Dances